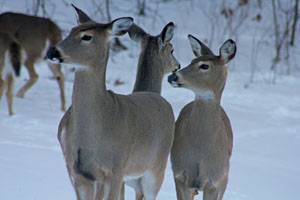 The white-tailed deer (Odocoileus virginianus) is one of two members of the deer family (Cervidae) commonly found in the Great Plains. When alarmed, white-tailed deer hold their tails erect, baring their white underside and white rump. Bucks (males) begin growing bonelike antlers early each summer and by early fall the antlers stop growing and harden. The antlers have a main beam with tines erupting from the top and are used for fighting and establishing rank in the social hierarchy.

White-tailed deer are very adaptable, both in the habitats they occupy and the foods they eat. The highest densities of whitetails in the Great Plains occur where forests along rivers and streams are flanked by agricultural fields. Wooded areas provide deer with protective cover and natural foods. Agricultural fields provide abundant, high-quality foods. The availability of large tracts of winter cover and travel corridors between seasonal ranges are primary factors limiting populations.

By the early nineteenth century, unregulated harvesting had extirpated white-tailed deer from many areas. However, their ability to adapt to human activities has allowed them to revive throughout the region, and current populations are stable to increasing in rural and urban settings. In fact, their range may be increasing westward. High deer populations can create problems though, for farmers, foresters, rural and urban residents, and motorists. White-tailed deer are the most popular big-game animal in North America. Both deer hunting and habitat manipulation are essential for managing and controlling their populations.