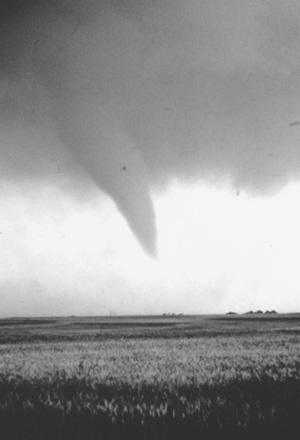 Tornadoes occur more frequently and are more intense in the Great Plains than in any other region on earth. Plains geography, with fringing mountain ranges running predominantly north to south, allows cold dry air from the north to collide with warm moist tropical air from the south. The jet stream, which seasonally migrates south across the Great Plains, is another essential ingredient in the creation of tornadoes. The highest frequency of tornadoes is in central Oklahoma, but incidence is also high in a zone from northeast Texas through Kansas to eastern Nebraska and Iowa. This region is commonly known as "tornado alley." The tornado season for North America peaks in May; however, there is considerable geographic variation in the timing of peak occurrence. For example, tornadoes in Texas and Oklahoma peak in April, in Nebraska in June, and in the Southern Prairie Provinces in late July and early August.

Tornadoes develop on the backside of particularly strong thunderstorms and hang down from the cloud as if the thunderstorm had a tail. These tornado-producing thunderstorms can occur singly or in a line known as a squall line, which often produces multiple tornadoes. Great Plains tornadoes commonly occur in late afternoon, when surface temperatures are the highest, providing the daily maximum uplift to the moist air near the ground. Most tornadoes move from the southwest toward the northeast; however, they may travel in any direction, and in some rare instances they remain stationary or reverse direction. 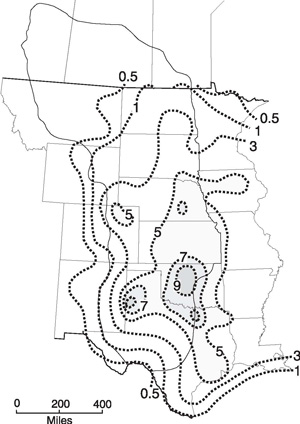 Tornado data have been collected only since the early 1950s. Since that time the data indicate that there has been an increasing trend in tornadoes in the Great Plains. However, this increase has been observed only in the weak F0 and F1 tornadoes; there has been no increase in the number of days with tornadoes. Scientists have concluded that almost all of the apparent increase is due to enhanced public awareness and better reporting methods during the last few decades.