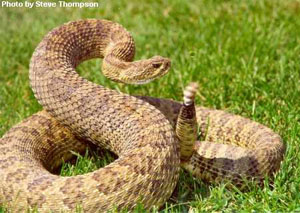 Rattlesnakes (Crotalus spp. and Sistrurus spp.) are found throughout the Great Plains, with ten species (nine Crotalus, one Sistrurus) ranging from northern Mexico up through the Prairie Provinces of Canada. They live in a number of diverse habitats, including deserts, grasslands, and woodlands. In the Great Plains, rattlesnakes are often associated with prairie dog towns.

During winter, large groups of rattlesnakes can often be found in hibernacula (cavities or burrows where they overwinter), sometimes with other species of snakes. Rattlesnakes give birth to live young, and litter sizes range from one to twenty-five, often depending on the size of the female. Rattlesnakes feed on small mammals, birds, or in some cases, reptiles and amphibians, using infrared sensors located in pits in the front of their heads to locate their prey (hence the name pit vipers). Rattlesnakes have a keen ability to track prey they have envenomated and released. The toxicity of rattlesnake bites varies with the species and size of the snake. Rattlesnake venom causes the necrosis of living tissues and, in some species, includes neurotoxins that affect the nervous system of the prey.

Dangerous and feared, rattlesnakes are widely represented in the folklore, myths, art, and literature of Native American and European American peoples of the Great Plains. Their dangerous reputation (often exaggerated) has led to such traditions as the "rattlesnake roundup" that involves the slaughter of many individuals. Roundups, along with habitat fragmentation, have resulted in drastic consequences for the long-term persistence of rattlesnake populations.