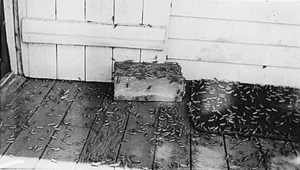 Grasshoppers inhabit all grasslands and associated arid regions in the Great Plains, where they eat a varied diet of grasses or herbs. Among native herbivores, grasshoppers rank among the most conspicuous and important consumers of aboveground vegetation in natural grasslands, often rivaling large vertebrate ungulates in impact. The species diversity of grasshoppers is great, with about 750 species found throughout North America and about 400 species inhabiting the seventeen western states. These numbers are similar to bird species diversity. Taxonomically, grasshoppers in the Great Plains are divided into four main groups or subfamilies: Gomphocerines (slant-faced grasshoppers), Oedipodines (band-winged grasshoppers), Melanoplines (spur-throat grasshoppers), and Cyrtacanthacradines. These groupings reflect historical, evolutionary trajectories that loosely predict diet, reproductive characteristics, and habitat use. Migratory locusts, a form of grasshopper, are not found in North America although they do occur in Central America, and the term has been repeatedly misused in popular accounts describing grasshopper outbreaks.

Given the great number of grasshopper species in the Great Plains, it is not surprising that species react to common environmental factors in different ways, with obvious species-specific differences in plant species eaten, courtship behavior, habitat selection, and geographic distribution. Unlike butterflies or leafhoppers, grasshoppers do not specialize on particular host plants, although they are discriminating feeders and will not feed on just anything. Grasshopper assemblies change in species composition along environmental gradients, just as plant communities vary, often in a gradual manner.

Grasshoppers occur year-round at all sites, primarily as eggs or overwintering nymphs during cold months and nymphs or reproductive adults at other times. Seasonal appearances of nymphs and adults of different species result in distinct groups of one-generation- per-year spring and summer species complexes in the Central and Northern Great Plains, and species with extended seasonality or even multiple generations per year populate the Southern Great Plains.

Densities rarely become so great that vegetation of entire regions is denuded with great impact on native plants as well as crops. In most years, however, grasshoppers consume less than 10 percent of the standing vegetation in grasslands. Rocky mountain locusts (Melanoplus spretus Walsh) presented a spectacular example of grasshopper outbreaks during the mid– and late nineteenth century, when millions of individuals dispersed from central breeding grounds in the shortgrass prairies of Colorado into neighboring eastern states, causing significant crop damage. A particularly vivid portrayal of such an infestation is given in the novel Giants in the Earth (1927), O. E. Rölvaag's vivid saga of pioneer settlement in South Dakota in the 1870s. This species is now presumed extinct for unknown reasons, probably resulting from agricultural development in shortgrass prairie regions.

Grasshopper populations are quite dynamic, with periodic fluctuations in overall numbers for all species about every seven to ten years. Climate and food quality can play important roles in these changes, but many other ecological factors are also involved, including competition for limited food resources. Predators and other natural enemies–primarily birds, spiders, other insect predators, and insect parasites –also exert significant limiting effects on population sizes; pathogens, including bacteria, viruses, and fungi, can also kill many grasshoppers in some years.