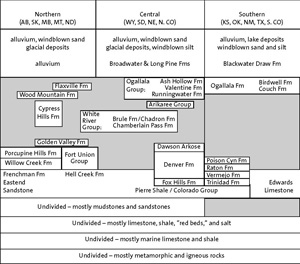 Generalized Chart of Rocks of the Great Plains Note: Unit names are representative and not complete. Time column is not to scale. Shading represents missing intervals of strata.

Any discussion of the geology of a given physiographic region should distinguish between the history of the present landscape and the older geologic record that, for the most part, lies buried beneath the area. The oldest rocks under the Great Plains belong to the Precambrian era and represent a complex set of primarily igneous and metamorphic rocks. They record the construction of the North American continent as a series of continental plates which collided with an earlier "North America" that was 2.1 billion years old and much farther south than today. These ancient rocks are exposed at the surface within the Great Plains in the Black Hills and the Central Texas and Hartville (eastern Wyoming) Uplifts.

About one billion years ago, the last amalgamation of continental material involving the future Great Plains region was completed, and erosion prevailed over deposition for the next half billion years, leaving little in the way of a rock record in the central part of the continent. Beginning about 540 million years ago, the first of many shallow inland seas ushered in the Paleozoic and later the Mesozoic eras. Shallow ocean waters covered a significant part of the interior of North America, including the region we recognize as the Great Plains, for most of Paleozoic and Mesozoic time. Typically between 5,000 and 10,000 feet of layered sediments, predominantly limestones, shales, and sandstones representing a mixture of seafloor, near-shore, and delta environments, accumulated during the course of almost 480 million years.

This long period of predominantly shallow marine deposition was brought to a close some 70 million years ago when a major period of mountain building (the Laramide Orogeny) created a belt of mountains stretching from Alaska to Mexico. This major shift in geologic processes lasted for more than 20 million years, as the continental seas retreated, to be replaced by the first landscapes of the ancestral Great Plains. Uplift along the eastern margin of the Rocky Mountains was dramatic, and deposits of the Cretaceous seas were raised thousands of feet above sea level. East of the rising Rockies and the flanking basins, gentle warping and uplift raised the former seabeds from one to a few thousand feet. The Black Hills and the Laramie Range and Hartville Uplift of eastern Wyoming were formed as highlands probably late in the Laramide Orogeny. They reached maximum elevation in the late Paleocene and early Eocene.

The forces of erosion immediately attacked all of these new highlands, and the mud, sand, and gravel produced were transported by eastward-flowing rivers and deposited in low basins on the western margin of the newly created Plains during the Paleocene. The majority of these deposits were preserved in the Northern Great Plains, and no sediment or depositional record has been discovered for the first 25 million years of the Cenozoic era in the Central Great Plains except for the Denver and Raton Basins. Erosion and/or nondeposition was the order of the day for an even longer time, some 50 million years, in the Southern Great Plains. The following discussion will focus on more specific aspects of the geologic history of the Southern, Central, and Northern Great Plains.

The rivers originating in the newly arisen southern Rocky Mountains flowed eastward and carved a series of drainages hundreds of feet deep into the recently uplifted Mesozoic strata. The record in the Southern Great Plains for the first 75 percent of the Cenozoic, however, speaks only of erosion. Only the Raton Basin contains sedimentary rocks of early Cenozoic age. The enormous quantity of debris that was shed off the rising mountains was transported across the region into the Gulf of Mexico, forming major deltas along the coastline. Enough sediment was delivered in the early Cenozoic to the Gulf that the coastline was pushed more than 100 miles seaward. Finally, about 12 million years ago, braided streams flowing in the valleys began to deposit sand and gravel, and the construction of the Southern High Plains was under way. These valleys did not always completely fill with stream deposits, and in Texas and eastern New Mexico they are often capped by windblown sand and silt, which were also deposited on the adjacent uplands. Near the end of the Miocene and into the early Pliocene, sedimentation rates slowed and extensive calcareous soils (caliches) developed on a relatively stable land surface. These calcareous soils form the hard and durable caprock horizons that cover much of the Southern High Plains. Geologists have included these deposits within the Ogallala Formation or Group. These strata comprise the majority of sediments in the High Plains aquifer, the primary source of groundwater in the Southern and Central Great Plains. The Quaternary deposits of the Southern High Plains are primarily windblown sandy silt and shallow lake sediments.

In the Central Great Plains there is a good record of early Cenozoic (Paleocene) deposition only in the Denver Basin and in the Williston Basin of northwestern South Dakota. The basal Paleocene rocks (Denver Formation) are up to 1,500 feet thick and consist of fine-grained river floodplain, swamp, and lake sediments with scattered coaly beds. These strata are overlain by coarse sandstones and conglomerates (Dawson Formation), representing large alluvial fans deposited by braided rivers that drained the newly arisen Rocky Mountain Front Range. The climate was probably tropical to subtropical throughout most of the Great Plains during the Paleocene epoch. For the succeeding 20 million years, representing most of the Eocene, only a sparse rock record is preserved and erosion or nondeposition was widespread throughout the Great Plains. A major period of sedimentation was then initiated in the late Eocene and continued into the Oligocene. Over the next eight million years, as much as 1,300 feet of predominantly fine-grained sediment, the White River Group, was deposited across much of the Central Great Plains. This deposit is unique because much of it was deposited by the wind, and typically more than 80 percent of the fine-grained mineral grains are shards of volcanic glass or volcanic minerals derived from huge eruptive centers in the Great Basin of Nevada and Utah. There are widespread coarse-grained river deposits in the lower part of the White River Group, but the upper half consists primarily of windblown sandy silt, an ancient dust (loess) deposit that blanketed and built up the landscapes. This interval also marks a change from subtropical to a subhumid (and possibly semiarid) environment in the Central Great Plains.

The next major set of rocks, the Arikaree Group, represents about 10 million years of late Oligocene and early Miocene time and is restricted to western Nebraska and adjoining parts of South Dakota and Wyoming. The basal Arikaree strata were deposited in several valleys as sandy river sediments. However, the remainder of the Arikaree is composed primarily of windblown fine sand and silt. As much as 40 to 70 percent of these grains have a volcanic origin, but they appear to be largely derived from huge volcanic eruptions in Colorado instead of the Great Basin. At the end of Arikaree deposition, about 18 million years ago, the dominant depositional process and accompanying landscape development underwent a major shift. The constructional and widespread windblown deposits of the Arikaree and White River Groups gave way to deposition in restricted river valleys that typifies the Miocene-age Ogallala Group. There was also a cessation of volcanically derived material blown into the Great Plains, and from that time to the present the Rocky Mountains have been the major source (excluding continental glacial deposits) of sediment deposited in the Plains. Ogallala deposition began about six million years earlier here than in the Southern Great Plains, and landscape evolution was more complex, as there are more cycles of valley cutting and filling preserved in the rock record. Sediment transported out of the Central and Northern Great Plains by rivers during the Miocene was probably delivered to the ocean via Hudson Bay rather than the Gulf of Mexico. Observations of ancient soils and mammal fossils of the Arikaree and Ogallala Groups suggest that shortgrass prairies first appeared in the Great Plains in the early Miocene, about 22 million years ago, and that tallgrass prairies did not appear until the late Miocene, about 8 to 10 million years ago.

Ogallala sedimentation ceased across the Central and Southern Great Plains at about the same time, some five million years ago at the end of the Miocene. The region had less local relief than today and would have presented remarkable vistas of vast, nearly unbroken grasslands, sloping gently to the east and ramping westward up onto the Rockies. Most of the present physiographic regions of the Great Plains are a result of erosion in the last five million years. Widespread uplift to the west and in the Black Hills caused rivers draining these highlands to erode the landscape once again and the Great Plains were carved up. One of the few remaining examples of the "climax" Great Plains topography is found in the "Gangplank" area west of Cheyenne, Wyoming. Here the Union Pacific Railroad and Interstate 80 use the gentle slope of the old Ogallala surface to climb to the summit of the Laramie Mountains. Renewed uplift of the Rocky Mountains of northern Colorado and southeastern Wyoming between 3.5 and 2 million years ago (Pliocene epoch), perhaps aided by increased precipitation, delivered coarse sediment out onto the Great Plains via ancestral South and North Platte Rivers. Within Colorado, Wyoming, and western Nebraska, these deposits were confined to valleys no larger than those of the present North and South Platte. In central Nebraska, however, a complex sheet of sand and gravel, as much as 200 feet thick, was deposited over 20,000 square miles. These deposits, referred to as the Broadwater and Long Pine Formations, represent the greatest known volume of coarse material shed into the Great Plains in the last 34 million years.

The Williston Basin, covering 60,000 square miles, contains the most extensive and complete section of Paleocene deposits (Fort Union Group) in the Great Plains. The Fort Union Group consists of as much as 1,800 feet of sandstone, mudstone, and thick coal beds deposited mainly in delta, swamp, and river environments. The last of the great interior seas was slowly retreating toward the northeast and Hudson Bay while the lower part of the Fort Union was being deposited. It left behind a deposit of shale called the Cannonball Formation. The Eocene primarily marks a time of erosion. While late Eocene- to Oligocene-age White River strata were deposited in North Dakota, to the northwest in Saskatchewan the equivalent-age Cypress Hills Formation was deposited. However, it is a coarse-grained river deposit compared to the windblown White River strata. There are a few thin and widely scattered Miocene- and Pliocene-age river deposits found across the Northern Great Plains. It has been estimated that up to two kilometers of sediment were removed by erosion from this region between 34 and 2 million years ago. What is left is only a small fraction of the enormous quantity of material that was moved out of the region, a situation similar to the Southern Great Plains.

During the last two million years, the geologic history of the Central and Northern Great Plains was dominated by the effects of continental glaciation. In the Southern Plains, the record is one of interplay between deposition by running water, winds, and in lake basins.

James B. Swinehart University of Nebraska-Lincoln