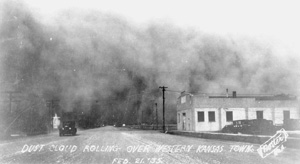 The Dust Bowl was an area of drought and severe wind erosion in southwestern Kansas, southeastern Colorado, northeastern New Mexico, and the panhandles of Oklahoma and Texas during the 1930s. This area extended approximately 400 miles from north to south and 300 miles from east to west, although the boundary was never precise because of fluctuations in annual precipitation.

The area was first given the name "Dust Bowl" by Robert E. Geiger, a reporter for the Washington DC Evening Star, who used the term in an article following a severe dust storm, known as a black blizzard, on April 14, 1935. Soon, the Soil Conservation Service and the public were using the phrase Dust Bowl to identify the area of the Southern Great Plains that experienced the worst drought, wind erosion, and dust storms.

Although drought and dust storms are natural phenomena in the Great Plains, it was the rapid expansion of wheat production following World War I that destroyed soil-holding native grasses and created the Dust Bowl. After drought ruined the wheat crop during the autumn of 1931, the prevailing winds began to lift the soil and plague the region with dust storms by late January 1932.

As the drought and dust storms worsened during the mid-1930s, the federal government responded to the economic and technical needs of the drought-stricken farmers in the Dust Bowl with a host of programs. The Agricultural Adjustment Administration provided funds to farmers who agreed to limit wheat and cotton production, while the Commodity Credit Corporation offered price supporting loans on these crops. The Soil Conservation Service demonstrated terracing, strip cropping, and grass seeding techniques that prevented wind erosion and provided financial assistance that enabled farmers to apply these techniques. The Resettlement Administration and the Farm Security Administration furnished loans to the most destitute farmers who could not receive credit from other lending institutions to sustain their families and agricultural operations. The Farm Security Administration also purchased wind-eroded lands from farmers and returned those areas to grasslands. Originally known as landutilization projects, they are now identified as national grasslands.

In 1935 the Resettlement Administration filmed the documentary The Plow That Broke the Plains, hoping to gain public and congressional support for its program to resettle people from the worst of the eroded lands. In 1937 Life magazine published several paintings by Alexandre Hogue that depicted conditions in the Dust Bowl. Residents of the Dust Bowl criticized these works because they seemed to place the blame for the dust storms on the farmers and their new laborsaving technology, such as tractors and combines, rather than on drought. In 1940, Congress ordered the film withdrawn from circulation.

In 1938 wind erosion began to diminish with the return of near-normal precipitation to many areas of the Dust Bowl. By 1940 the drought on the Southern Great Plains had ended. The federal programs that had helped farmers remain on the land, practice soil conservation, and endure the economic crisis of the Great Depression were not without their critics. Given the problems of drought, dust, and economic depression, however, these programs provided essential assistance at a time when abnormal climatic conditions and poor farming practices created unprecedented wind erosion and earned the Southern Great Plains its reputation as the Dust Bowl.