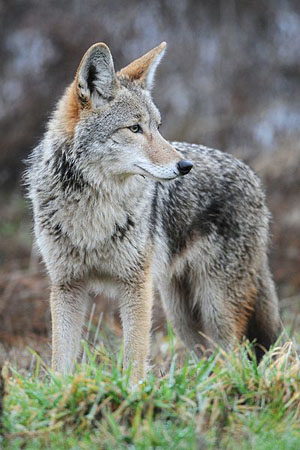 The most opportunistic of all North American predators, the coyote (Canis laterans) was familiar to Native Americans, early travelers, and settlers in the Great Plains. Their characteristic yip and resonant howling earned them the title "song dog of the prairie." Figuring prominently in the religious traditions of the Plains Indians, the coyotes of the Great Plains were observed by Lewis and Clark, who termed them the "prairie wolf." Thomas Say of the Stephen Long expedition in 1823 provided more specific information on this ubiquitous western animal and gave it its scientific name.

Smaller in size than its relative the wolf, coyotes usually weigh between eighteen and thirty pounds, are born in litters of five to seven pups, and live up to eighteen years. They are remarkably adaptable animals that can live in almost any environment. As native fauna was reduced through settlement and as domesticated animals were raised in the Great Plains, the omnivorous coyote began to prey upon the chickens, pigs, cattle, and sheep of the emerging farms and ranches. Coyote predation became a problem for European American settlers, and the resources of local, state, and federal government were called upon to address this problem. In the latter half of the nineteenth century, state bounties were placed on coyotes. Trappers hunted, poisoned, and trapped them, but there was only limited success in reducing their numbers. Coyotes remain as one of the most persistent and distinctive members of the fauna of the Great Plains.

Van Wormer, Joe. The World of the Coyote. Philadelphia: J. B. Lippincott Company, 1964.