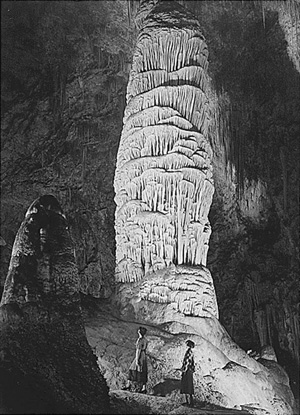 Located in southeastern New Mexico where the Great Plains meets the block uplifts of the Basin and Range Province, Carlsbad Caverns is one of the most spectacular and famous caves in the world. Carlsbad Caverns was recognized as a national park in 1930 and as a World Heritage Site in 1995. Twenty miles of rooms and passages have been explored and surveyed, and new discoveries continue to be made. The Big Room is 375 feet from floor to ceiling and is adorned with large, but delicate, stalactites and stalagmites. The cave is home to about a half million Mexican free-tail bats. The bat population was estimated at 8.7 million in the 1930s. ddt use in the United States and Mexico is the apparent cause for the sharp decline in their numbers.

The caverns developed in reef and back-reef limestones that were deposited along the north margin of a rapidly subsiding marine basin during Permian times. The large cave and more than fifty caves nearby lie below a sparsely vegetated, 4,400-foot-high plateau that receives less than fifteen inches of rainfall per year. Most caves form in humid settings through the dissolution of limestone by carbonic acid. (Carbonic acid is produced when carbon dioxide from the root zone mixes with groundwater.) However, clues such as thick gypsum (calcium sulfate) deposits within Carlsbad Caverns indicate that sulfuric, not carbonic, acid generated this cave. Hydrogen sulfide gas is abundant in the deeply buried, petroleum-rich rocks of the basin south of the cave. When this gas migrated upward, it was oxidized by groundwater, thereby generating sulfuric acid. Cavernous pores in the limestone and gypsum deposits are the resulting product.

David B. Loope University of Nebraska-Lincoln