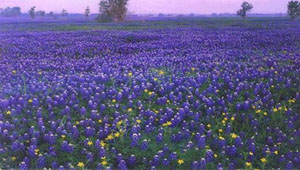 Bluebonnets are lupines that bring to mind visions of beauty and spectacular color. These wildflowers of the Legume family (Fabaceae, alternately Leguminosae), genus Lupinus, are breathtaking in full bloom, covering prairies and hills with carpets of solid color ranging from blue-purple to deep blue, pale blue to creamy-white, or pink. There are close to a dozen species that grow within the Great Plains from Texas to Canada.

Bluebonnets are winter annuals, or perennials, that form rosettes in the fall and flowers in the spring. The alternate leaves are palmately compound, bearing four to fifteen leaflets (usually five or seven). Pea-like flowers in terminal clusters have five uniformly colored petals consisting of two wing petals, two keel petals, and an erect banner petal bearing a central white spot, yellow in some species, that turns burgundy-red with age. Interestingly, the main pollinators of bluebonnets, bees and bumblebees, are drawn to the white spot in their nectar search and shun the red spot, which indicates nectar is no longer available.

Emblematic of Texas, bluebonnet is the state flower, but arguments existed for seventy years as to which species should be the "official" one. In 1971, the legislature passed a law naming all the species of Lupinus found within the state the official flower. The loveliest and most conspicuous one is Lupinus texensis of central Texas.

The genus name derives from the Latin lupus, meaning "wolf." The five leaflets were thought to resemble wolflike tracks, and long ago these plants were blamed for robbing the soil of nutrients. Now we know that nodules on the roots contain nitrogen-fixing bacteria, Rhizobium spp., that actually enrich the soil.