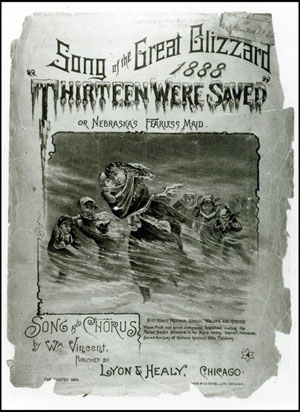 The climate of the Great Plains region is punctuated with extreme variation in both temperature and precipitation, and one of these extreme weather events is the blizzard. A blizzard is a storm with sustained winds in excess of thirty-five miles per hour, temperatures below 20ºF, and blowing or falling snow that reduces visibility to less than a quarter mile.

Although most common in winter, Plains blizzards also occur in autumn and spring. The meteorological "stage" is set when a mass of cold polar air moves rapidly southward from higher latitudes and encounters a strong northward flow of moist tropical air from lower latitudes. When a low-pressure cell encounters the energy difference between these two unlike air masses, it rapidly grows in strength, becoming a "deepening low." As the low-pressure cell strengthens, it feeds itself by pulling southward even greater amounts of cold air and northward even larger amounts of warm air and moisture. By the time the blizzard reaches full intensity, it is not unusual to have severe thunderstorms and tornadoes across the southern portion of this major storm. Snowfalls often exceed 1½ feet just north of the path of the low, and wind chill temperatures drop to life-threatening levels across the northern portion of the storm. The winds pack the snow, making it extremely difficult to walk through and to remove from driveways and sidewalks. Although urban highways are usually opened within a day or so of a blizzard, rural roads often remain impassible for many days.

Blizzards have, on rare occasion, occurred as far south as northern Texas, but they increase in frequency northward up the Great Plains. Nebraska, for example, averages one to two blizzards per year while the southern parts of the Prairie Provinces average from three to five blizzards per year. The climate history of the Great Plains is replete with stories of blizzards, but two storms stand out. Most legendary is the "Blizzard of '88," which occurred in January 1888. The region from Texas to Alberta was affected by this paralyzing storm. The suddenness of the blizzard conditions resulted in many people losing their lives as they traveled even short distances to their homes. The blizzard of January 1975, called the "blizzard of the century," struck the Plains from Kansas to Manitoba. This blizzard was so fierce that it set all-time record lowpressure values for the region.