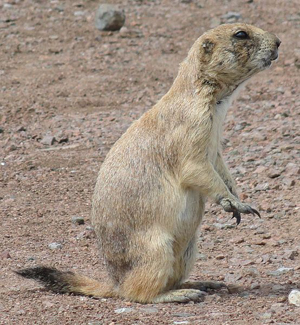 "A BLack-Tailed Prairie Dog photographed at Wichita Mountain Wildlife Refuge. Note that it has an ear tag" (Leonardo Weiss)

The black-tailed prairie dog (Cynomys ludovicianus) is a medium-sized burrowing rodent that lives in colonies or towns. About five billion prairie dogs inhabited the Great Plains in the early 1900s. The largest prairie dog colony on record, in Texas, measured 100 miles wide by 250 miles long.

Black-tailed prairie dogs are social animals and have twelve distinct calls and various postures that they use to communicate with others. They warn each other of danger with a short series of barks and signal all is clear with a spectacular jump-yip call. Each family group defends an area of about one acre. When two prairie dogs meet, they often touch their teeth together. This "kiss" is used to distinguish a family member from a stranger.

Black-tailed prairie dogs are active year-round. During the day, they feed on grasses, clip tall plants, and maintain their burrows. The vegetation in a colony is shorter and consists of different species than the surrounding grasslands, resulting in unique islands of habitat. More than 200 species of wildlife have been observed in the vicinity of prairie dog towns. Species that are closely associated with prairie dogs include the mountain plover, ferruginous hawk, burrowing owl, and the endangered black-footed ferret. Songbirds and small mammals frequent towns in search of food and shelter. Prairie dog burrows provide homes for deer mice, cottontail rabbits, and prairie rattlesnakes. Prairie dogs also are food for several predators, including the golden eagle, badger, coyote, and swift fox.

Historically, bison grazed on prairie dog towns. Humans replaced the bison with cattle and much of the prairie with crop fields. Since 1900, populations of prairie dogs have been reduced significantly in some areas and eliminated in others, largely due to cultivation of prairie soils, efforts to poison prairie dogs, and residential development. The black-tailed prairie dog was recently proposed for listing as a threatened species under the federal Endangered Species Act. The listing of the black-tailed prairie dog was determined to be "warranted but precluded," and their status is now reviewed annually. Several federal and state agencies, Native American tribes, conservation organizations, and individuals are developing plans and programs to ensure the long-term viability of prairie dog populations and minimize the impacts of prairie dogs on private landowners. Prairie dogs provide recreation for nature observers, photographers, and the sporting public. With proper management, populations can be maintained at levels that ensure the natural heritage and biodiversity of the Great Plains.