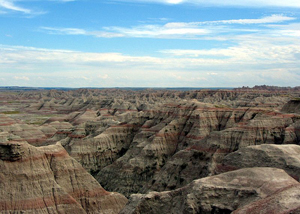 Badlands are a form of intense gullying that results from a combination of four factors: clayrich material, such as shale, that inhibits water penetration; limited vegetation to impede runoff of precipitation; rainfall concentrated in scattered, intense showers; and downcutting of the drainage system. The four factors cause an intricate, fine-textured drainage network that is characterized by many V- shaped, straight-sided gullies divided by knifelike ridges.

Principal badland areas in the Great Plains are at Badlands National Park in southwestern South Dakota, Theodore Roosevelt National Park in western North Dakota, and Dinosaur Provincial Park in southern Alberta. Shales of the White River Group (Oligocene), including the Chadron and Brule Formations, form the badlands in South Dakota and northwestern Nebraska. Shales of the Fort Union Formation (Paleocene) form them in North Dakota and eastern Montana, and Cretaceous shales shape the badlands in Alberta. Other, more isolated areas of badlands occur in the Great Plains, typically where impermeable shales outcrop at the land surface and are subject to the conditions named above. Generally, badlands are common along the Little Missouri and Cheyenne Rivers in the Dakotas and along the White River north of Pine Ridge, as at Toadstool State Park in northwestern Nebraska and at Badlands National Park.