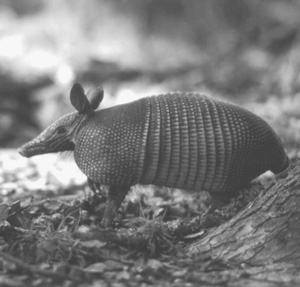 The nine-banded armadillo, Dasypus novemcinctus, is a member of the order Xenarthra, which includes slow-moving and highly specialized creatures such as sloths and anteaters. Historically a creature of South America, the coastal prairies, and extreme south Texas, the armadillo extended its range during the twentieth century into the Plains region of Texas, Oklahoma, Kansas, and southern Nebraska. Since 1981 the armadillo has been the official state mascot of Texas.

With long claws on all of its toes, the armadillo is a proficient digger. Other physical aspects include a bony carapace protecting the entire dorsal area of the body and nine bands between the rump and shoulders allowing flexibility in body movement. The head, protected by a bony plate, can be withdrawn into the shell when perceived or real danger is near. Overall body coloration is a grayish brown. About 90 percent of the armadillo's diet consists of insects and various species of invertebrates such as crayfish and millipedes.

Population densities within its range vary widely and are dictated by soil types and favorable habitat. Densities tend to be high where loose sandy soil exists along streambeds and in woodlands and lower in areas where tighter clay-based soils predominate. The denning habit of the armadillo is novel in that a single animal may excavate and occupy several dens within its range. These lairs are located along stream banks, beneath boulders, and around tree trunks. Armadillos do not hibernate, but they do stay underground for extended periods in freezing weather.

The armadillo's reproduction system involves delayed implantation. Breeding occurs in late July, but the fertilized ovum remains in the uterus for about fourteen weeks without development. By November, normal development resumes and the young are born four months later as identical quadruplets of the same sex.