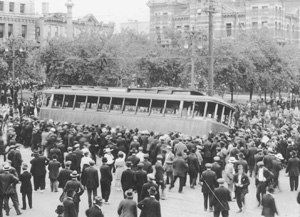 For six weeks in the early summer of 1919, Winnipeg, then the largest city in the Canadian Prairies, was shut down by a general strike. More than 30,000 of the city's workers walked off their jobs in a test of strength that was to prove the focal point of a labor explosion that was national and international in scope. The strike was provoked by the refusal of employers to recognize and bargain with the metal and building trades federations of unions. The Winnipeg Trades and Labor Council organized a poll of its affiliates' members, and a general strike was approved by a vote of 11,112 to 524. The response to the strike call on May 15 was overwhelming. Not only did organized workers respond solidly, shutting down factories, newspapers, telephones, and streetcars, but thousands of unorganized workers joined them. The city fell silent.

Longer and more disciplined than the Seattle General Strike the previous February, the Winnipeg confrontation remains without precedent in the history of class confrontation in North America. In the discourse of its opponents, the strike was a drive for revolutionary power by working-class militants. Workers, perhaps too defensively, saw the strike as a struggle for collective bargaining. Traditional accounts of the strike have been shaped by these conflicting narratives, with historians siding with the strikers' portrayal of the strike.

Recent assessments of the strike have rejected this dichotomy and now view the strike as a complex social event with various meanings rooted in the growing social crisis that marked Canadian society in the last years of World War I. Wartime inflation, the dramatic growth in union membership, the movement for industrial unionism, and the determination of workers to press for a new postwar order shaped an unprecedented threat to the state and to business capital interests in 1919. A Royal Commission on Industrial Relations, appointed by the Canadian government to investigate the labor revolt, encountered widespread anger at "profiteering" and heard repeated calls for "production for use and not for profit." Across the country, workers debated various tactics and increasingly adopted the general strike as the best means of fostering solidarity and furthering working-class interests during postwar reconstruction. In 1918 the Winnipeg Trades and Labor Council had debated calling a general strike on four different occasions. When it finally occurred, old animosities among workers, between central and eastern European immigrants and Canadian or British-born workers, and between men and women workers, dissolved before the logic of class unity. Even the swelling ranks of returned war veterans rallied, for the most part, to labor's cause, adding even greater volatility to the developing crisis.

Revolutions in Russia and Germany no longer seemed very remote in Winnipeg in 1919. While trade unions tried to focus negotiations on issues of collective bargaining, employers and those in charge of the federal government were deeply uneasy about the trajectory of this unprecedented working-class mobilization. Determined that the strike had to be crushed, employers formed a "Citizens Committee of One Thousand" to fight the strike and support "established government." Despite the overwhelming British-Canadian character of the strike leadership, they denounced the general strike as an attempt at revolution inspired by "enemy aliens" and called for its immediate suppression by the state. At the behest of the Committee, Winnipeg's entire city police force was dismissed when they refused, en masse, to sign a loyalty oath; the force was replaced with untrained, antistriker "specials."

While the federal government was committed from the outset to the unconditional defeat of the strike, it was determined to avoid provoking a threatened walkout of the railway-running trades across western Canada. Such a development could easily have unified the wave of local strikes in sympathy with Winnipeg workers into a massive strike from Lake Superior to the Pacific. By separate negotiations, the Canadian minister of labor managed to appease the leadership of the railroad-running trade unions. Early in June, the federal government prepared the legislative groundwork for an assault on strike leadership by amending the Immigration Act to allow for the deportation from Canada of British subjects and broadened the Criminal Code definition of sedition. In late-night raids on June 16–17, the strike leaders were arrested, along with a group of eastern European immigrants, who could serve as evidence of the "alien" character of the struggle. On June 21–Bloody Saturday–a demonstration of prostrike returned-soldiers was brutally attacked by the specials and the Royal North-West Mounted Police, killing two men and injuring at least two dozen. Following further repression of the strikers' newspaper and the promise of a provincial government inquiry, the General Strike was ended on June 25.

The tide of postwar radicalism did not subside with the state suppression of the strike. Led by A. J. Andrews, members of the Citizens Committee of One Thousand mobilized the authority and resources of the federal Department of Justice in legal and ideological assaults designed to discredit and disperse proponents of labor radicalism in Winnipeg and elsewhere and to restore the legitimacy of the existing order. Postwar radicalism was condemned as a form of Bolshevism. The workers' revolt of 1919 was portrayed as a criminal enterprise and its radicals were jailed. Yet the legal and ideological ascendancy of the Citizens Committee and its allies in the government was far from absolute. Rather than produce mass adhesion to the established order, the assault on radicalism generated workingclass dissent and antagonism.