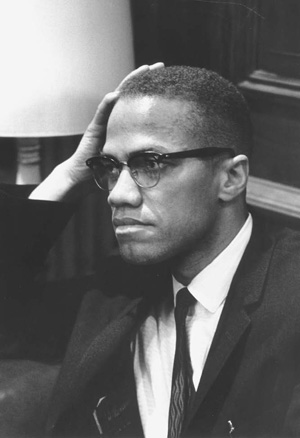 Malcolm X was born Malcolm Little at University Hospital in Omaha, Nebraska, on May 19, 1925. He was also known later in life by his religious name, El-Hajj Malik El-Shabbazz. His parents, Earl Little and Louise Norton Little, were both active members of Marcus Garvey's Universal Negro Improvement Association and they wrote for the UNIA paper, the Negro World.

The Littles' home was reportedly attacked by Ku Klux Klansmen in December 1926, and they left immediately for Milwaukee, Wisconsin. In January 1928 they moved to Lansing, Michigan. There, Earl Little, as an organizer for the Garvey movement, continued his community activism. In September 1931 his body was found by the railroad tracks, cut in half by a locomotive car. Historical accounts differ: some believe that local white supremacist organizations committed this murder; others have speculated that his death was a suicide. Whatever the case, from 1931 to 1939 the Little family disintegrated. In 1939 Malcolm's mother, Louise, was diagnosed as legally insane and committed to the state mental hospital in Kalamazoo, Michigan, where she remained for more than twenty years. Malcolm began having problems with the social welfare system and was placed in foster care. He also spent time in juvenile detention homes.

By 1941 Malcolm had moved to the Roxbury section of Boston to live with his sister Ella. He held various jobs, such as laborer and porter on the New Haven Railroad line, and he slipped into a life of petty crime. He moved back to Michigan in December 1942 but quickly returned to New York, where he continued working for the New Haven Railroad. From 1944 to 1946 Malcolm was continually involved in illegal activity, ranging from drugs and burglary to gambling and prostitution. In February 1946 he began serving an eight- to ten-year prison sentence at the Charlestown (Massachusetts) Prison for burglary. There, he began a self-taught study in reading and writing. After being relocated to the Concord Reformatory in 1947, Malcolm was exposed to the teachings of Elijah Muhammad by a fellow inmate. His life was transformed. Malcolm's siblings were also converted and accepted membership into the Nation of Islam.

After fifteen months at the Concord Reformatory, Malcolm was transferred to Norfolk Prison Colony, then sent back to Charlestown to serve the remainder of his sentence. Paroled in 1952, he went to live with his brother Wilfred in Inkster, Michigan, where he worked as a furniture salesman. That same year he was assigned his "X" to replace the name that had been taken from his slave ancestors and became an active member in the Nation of Islam.

From this point on, Malcolm X's activity and membership in the Nation of Islam intensified: in the fall of 1953 he became first minister of Boston Temple No. 11; in March 1954 he was assigned acting minister of Philadelphia Temple No. 12; and in June of that year, he was appointed minister of New York Temple No. 7. His message in the temple and on the streets of Harlem stressed black nationalism and lambasted integration as a hoax.

At the same time, Malcolm X also made an important transition in his family life. In 1958 he married Betty X (Sanders). In November his first daughter, Attallah, was born. She was followed in later years by daughters Quibilah (1960), Ilyasah (1962), and Gamilah (1964). When he died, his wife was pregnant with twins and gave birth to daughters, Malaak and Malikah, in November 1965.

Taking on the responsibilities and duties as a national spokesperson for the Nation of Islam, Malcolm traveled widely, expressing his views in television interviews, court cases involving civil rights, and forums on black equality and leadership. By 1963, however, his status was beginning to deteriorate within the leadership circle of the Nation of Islam. That year in Detroit, he gave one of his most influential lectures, "Message to the Grass Roots," arguing for black nationalism and thereby challenging Elijah Mohammad's conception of the Nation of Islam as a purely religious movement. Days later he referred to the death of President John F. Kennedy as "chickens coming home to roost." Immediately after making this comment, he was suspended from his position as national spokesperson for the Nation of Islam and banned from public speaking for ninety days. In March 1964, after his period of suspension, he announced that he was leaving the Nation of Islam to establish Muslim Mosque Incorporated and the Organization of Afro-American Unity. He moderated his views, moving toward accommodation with Martin Luther King's crusade for civil rights.

In April 1964 Malcolm journeyed to Mecca to make hajj, fulfilling his religious requirements and duties. This period also served as time for self-reflection and meditation. When he returned to the United States and founded the Organization of Afro-American Unity, he hoped to link the freedom struggles of blacks in Africa with those in the United States. The end came on February 21, 1965, when he was assassinated by four gunmen while giving a speech at the Audubon Ballroom in Harlem.

Malcolm X was only thirty-nine years old when he died, but in that brief lifespan he became one of the most important African American leaders of the twentieth century. Although often out of step with civil rights leaders because of his separatist views and his refusal to eschew violent means of change, he nurtured pride and self-respect in African Americans, and more than anyone else he reestablished their connection to Africa.