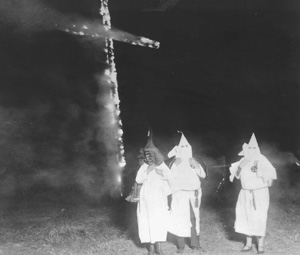 There are three separate and distinct periods of the Ku Klux Klan's history in the United States. The first Klan, founded at Pulaski, Tennessee, in 1865, did not have much of a presence in the Great Plains. Although it began as a local social club with secret rituals and costumes that usually featured flowing robes, pointed hats, and masks, the Klan spread quickly throughout the South with the promise that it would defend the Constitution and help the weak and oppressed. However, the Klan resorted to terror and extreme violence when blacks were given civil and voting rights. In 1877, when Reconstruction came to an end, the Klan officially disbanded.

The second Klan, founded in 1915 by William Joseph Simmons at Stone Mountain, Georgia, had a greater impact in the Plains. Simmons emphasized that the Klan was a fraternal charitable organization that supported white supremacy. The Klan grew rapidly after 1919, when it launched a national campaign to attract members. It was especially strong in urban areas, and by the mid-1920s it was organized in every state. Nationally the Klan claimed 10 million members by 1924, but recent scholars estimate that the membership was closer to two million. It is estimated that between 1915 and 1944, Klan membership in the Plains states made up 20 percent of the Klan's total membership. During this period, Klan membership was strongest in Texas (190,000) and Oklahoma (95,000), and declined northward through Colorado (45,000), Kansas (40,000), Nebraska (25,000), South Dakota (5,000), and North Dakota (3,000). The Klan was also strong in Alberta and Saskatchewan during the 1920s, drawing support for its anti-Catholic and anti-immigrant positions.

The Klan grew rapidly between 1921 and 1925 because it was able to exploit the fears and anxieties of post–World War I America. The Klan's promise to preserve traditional values and morals gave people a sense of power, fraternity, and security. Although the Klan still used antiblack rhetoric, especially in the Southern Plains, the Klan's primary message in the 1920s was that it stood for law and order, traditional morality, and most important, "100 percent Americanism." It was successful because it tailored its appeal in every community to respond to local issues and concerns. The Klan's appeal to "100 percent Americanism" allowed local Klans to target any group–blacks, Jews, radicals, immigrants, Mexicans, and especially Catholics.

The Klan used moral suasion, political influence, social pressure, and violence to accomplish its objectives. In the Northern Plains the Klan was rarely involved in acts of violence, and, while it influenced some local elections, it had a negligible impact on the political process. In Texas and Oklahoma, however, the Klan was involved in widespread public whippings, tar and featherings, lynchings, and brutal homicides. In Texas and Oklahoma alone there were as many as 1,000 victims of Klan violence. In Dallas the Klan was credited with sixty-eight floggings in 1922; in Oklahoma there was near civil war in 1923 when Gov. John C. Walton declared marshal law in an effort to control Klan violence. In Texas, Oklahoma, and Kansas the Klan was a major political force, and many Klansmen were elected to local, state, and national offices.

In Texas in the early 1920s the Klan controlled the lower house of the Texas legislature and elected Klansman Earl B. Mayfield to serve in the U.S. Senate. In 1924 in Kansas, William Allen White, the editor of the Emporia Gazette, gained national attention when he ran for governor in an attempt to resist the Klan's efforts to control the Republican Party.

Klan membership declined rapidly after 1925. Escalating violence, organized opposition, and corruption within the Klan organization, as well as the conviction of one the Klan's most important leaders for rape and murder, robbed the Klan of its claim to moral leadership. By the end of the 1930s the Klan was increasingly viewed as un-American. In 1944, when the government sued the Klan for back taxes, it disbanded.

The Klan revived after World War II to resist the civil rights movement. Lacking a national organizational structure, the Klan quickly split into a number of small, violent factions. It was involved in numerous bombings and murders in the South, particularly during the 1960s, but the Klan's nationwide membership numbered only in the tens of thousands. The Klan's violent, un-American reputation limited its appeal in the Plains. Still, by the early 1990s Klanwatch, a project of the Southern Poverty Law Center, reported that although Klan membership nationally had fallen to only 5,000, violent hate crimes were rapidly increasing and that small Klan units were again active in Colorado, Nebraska, Kansas, Oklahoma, and Texas.

Lay, Shawn. The Invisible Empire in the West: Toward a New Appraisal of the Ku Klux Klan of the 1920s. Chicago: University of Illinois Press, 1992.