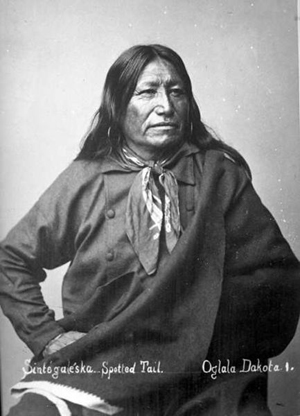 Spotted Tail (Sinte Galeska), a major Brule Sioux leader in the Plains Indian wars, was born to a man named Chunka (Tangled Hair) and a mother named Walks With Pipe, probably along the White River of South Dakota. Known as Jumping Buffalo in his youth, Spotted Tail got his adult name from a striped raccoon pelt that was given to him by a trapper.

In 1855 he was jailed at Fort Leavenworth in retaliation for the defeat of Lt. John Grattan's force the previous year by Brulés, though Spotted Tail had not been involved in the incident. Upon his release in 1856, he balanced Lakota nationalism with conciliation to the United States, as he was convinced of American military superiority. By 1866 he had refrained from hostilities against Americans, unlike his nephew Crazy Horse.

Spotted Tail made several trips to Washington dc on behalf of his people in the 1860s and 1870s. During the most important visit, in 1875, Spotted Tail was among the Sioux chiefs appointed by U.S. officials to negotiate the sale of the Black Hills following George Armstrong Custer's expedition there a year earlier. Spotted Tail, who was one of the few Sioux chiefs who understood the value to Americans of the gold in the hills, demanded that the government's offer of $6 million be declined, but under duress he eventually agreed to its sale.

In the 1870s tension arose between Red Cloud and Spotted Tail after U.S. o.cials appointed Spotted Tail as chief of the Sioux at the Spotted Tail and Rosebud Agencies, eventually replacing Red Cloud. Throughout the 1870s Spotted Tail was accused by Red Cloud of pocketing the proceeds from a sale of tribal land. Possibly as part of this dissension, Spotted Tail was shot to death on August 5, 1881, by Crow Dog, a Brulé subchief with whom he had several disputes. Crow Dog's murder case provided the gist of the Supreme Court case Ex Parte Crow Dog (1883), in which the defendant was eventually freed when the court ruled that the United States had no jurisdiction over the murder, which had occurred on Indian land.

Utley, Robert M. The Lance and the Shield: The Life and Times of Sitting Bull. New York: Henry Holt, 1993.