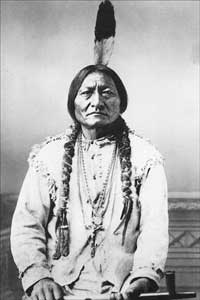 Sitting Bull (Tantanka Iyotanka) was born in the early 1830s along the Grand River at a place called Many Caches near present-day Bullhead, South Dakota. During the Plains Indian Wars (1865–76) he rose to prominence as a military and political leader among the Lakotas and led resistance against U.S. military and civilian encroachment through their traditional homelands between the mouth of the Grand and the Yellowstone River basin.

Sitting Bull distinguished himself early as a hunter and warrior and rose to prominence among his own people as a generous man and capable war leader; consequently, he was inducted into a number of prestigious warrior societies. In 1866 he gained attention of the American public for his attacks on soldiers and settlers at Fort Buford (located at the confluence of the Yellowstone and Missouri Rivers).

In response to intensifying outside pressures the Hunkpapa and other Lakota bands, principally the Itzipco, Minneconjou, Sihasapa, and a loose alliance of Oglalas under Crazy Horse, attempted to consolidate leadership. In 1866 or 1867 Sitting Bull was recognized as an important political and military leader of these bands. In some accounts he is labeled "supreme chief." Therefore, in 1867 and 1868, when Catholic missionary Pierre- Jean De Smet sought to broker a truce with the Lakotas, he dealt primarily with Sitting Bull. In these negotiations Sitting Bull rejected all overtures and stated his determination to protect his people's homeland and lifeways, a message he repeated often in subsequent years.

For a time tensions abated due to troop withdrawals along the Bozeman Trail as part of the 1868 Treaty of Fort Laramie, which created the Great Sioux Reservation. However, many Lakotas left their agencies to join Sitting Bull when federal officials failed to enforce provisions of the treaty and prospectors poured into the Black Hills after the government-sponsored expedition in 1874, led by George Armstrong Custer, confirmed the existence of gold there. Clashes between the army and "the Sitting Bull people," as they came to be known, were frequent.

In June 1876, during the annual Sun Dance, Sitting Bull had a vision of dead soldiers falling into an Indian camp, and on June 25, 1876, his prophecy came true with the defeat of Custer's command at the Battle of the Little Bighorn. After this fight, the army systematically hunted Native peoples, and by the fall of 1876 Sitting Bull was one of the few leaders still resisting surrender and living outside his agency. In October, Gen. Nelson Miles intercepted Sitting Bull in Montana Territory and demanded his surrender; typically, Sitting Bull stated his determination to continue living in the old way and resist federal demands. By May of 1877 Sitting Bull and about 400 followers had sought refuge in Saskatchewan, settling between Wood Mountain and Fort Qu'Appelle. Starvation was never far away, and the Dominion of Canada would not provide food or other support, so after lengthy discussion with Canadian and American officials, on July 19, 1881, Sitting Bull and 200 followers crossed into the United States and handed over horses and weapons at Fort Buford. Despite the U.S. government's assurances he would be repatriated with the Hunkpapa at Standing Rock Agency, Sitting Bull and about 100 of his people were held in detention at Fort Randall in southeastern Dakota Territory.

In May 1883 Sitting Bull was permitted to join his people at Standing Rock. There he came under the jurisdiction of Indian agent James McLaughlin, and a sustained clash of wills and philosophies ensued. Sitting Bull struggled to maintain a sense of nationhood and to preserve traditional Lakota values, while McLaughlin enforced federal policy. Sitting Bull left the reservation briefly in 1884 and 1885 to tour in two Wild West shows, then returned to Standing Rock to continue his role as outspoken critic of government attempts to divest the Sioux of nine million acres of their land. Nonetheless, the land was lost in 1889, and against this backdrop word of the Ghost Dance spread among the Sioux. Sitting Bull permitted the Ghost Dance in his camp along the Grand River, not far from his birthplace, and Agent McLaughlin quickly seized on this and petitioned the government to order his arrest. On December 12, 1890, arrest orders for Sitting Bull were sent from Washington. By daybreak on December 15, 1890, following an intense fight, Sitting Bull was dead, and eight of his followers and six Indian police lay dead or dying.

Utley, Robert M. The Lance and the Shield: The Life and Times of Sitting Bull. New York: Henry Holt, 1993.