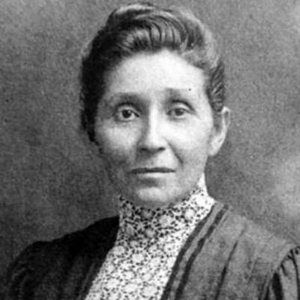 Physician and Indian reformer Susan La Flesche Picotte was born in June 1865, the youngest daughter of Joseph La Flesche, last traditional chief of the Omaha tribe. Joseph's commitment to education is reflected in her education. She attended the local Presbyterian mission school, the Omaha Agency Indian School, the Elizabeth Institute for Young Ladies in Elizabeth, New Jersey, and Hampton Normal and Agricultural Institute in Virginia, where she graduated in May 1886. Supported by the Connecticut Branch of the Women's National Indian Association, she attended the Woman's Medical College of Pennsylvania, graduating in March 1889 at the head of her class. Following an internship at the Woman's Hospital in Philadelphia, she returned to her reservation to practice medicine.

For the next four years, as government physician at the Omaha Agency Indian School, she dispensed medicine and encouraged tribal members to become Christian. Her religious dedication was rewarded years later, when in 1905 she was appointed medical missionary by the Presbyterian Board of Home Missions. Working out of the Blackbird Hills Presbyterian Church, she read the Bible in the Omaha language and held church services.

Ill health forced her resignation as government physician in 1893. She married Henry Picotte, a Sioux Indian from the Yankton Agency, and upon regaining her strength, resumed her medical practice in Bancroft and later in Walthill, Nebraska, among both Indians and whites. She lobbied for required medical inspection of schools, sanitary ice cream dishes and spoons, and free school drinking fountains; fought against tuberculosis and the common housefly; and campaigned against alcohol following the death of her hard-drinking husband. In addition, she organized the Thurston County Medical Association, served on Walthill's health board, chaired the State Health Committee of the Nebraska Federation of Women's Clubs, and organized a hospital for Walthill in 1913. She also helped organize a new church for Walthill, was active as president of the church missionary society, participated in a new chapter of the Eastern Star, and supported various community projects, lectures, and concerts.

In 1909, when the government arbitrarily extended the trust period for protecting Omaha land an additional ten years, she was chosen unanimously by the tribe to head a delegation to Washington DC. The Omahas were subsequently declared competent to rent or lease their lands and handle their own monies.

A product of the nineteenth-century reform movement and its assimilationist policy, she in turn helped her people prepare for the twentieth century. She died on September 18, 1915, and was buried in the Bancroft cemetery.