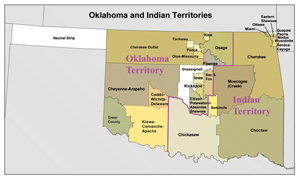 Map of Oklahoma and Indian Territories

All of Oklahoma was referred to as "Indian Territory" until 1890, when Congress partitioned Oklahoma Territory and made "Indian Territory" the formal name for the Five Civilized Tribes' domain. Indian Territory's relevance to the Great Plains thus spans from the 1820s, when the United States cleared title through treaty cessions by the Quapaws (1818) and Osages (1825) and designated the area as "Indian Country," to the Oklahoma land runs, beginning in 1889.

The area had long been permanently or seasonally occupied by Great Plains peoples, notably the Wichitas, Kiowas, and Plains Apaches. Comanche, Cheyenne, Arapaho, and Pawnee bison hunters also knew it well in the 1820s, as did hunters from the east, including bands of Cherokees, who came to the Arkansas and Red River areas decades before their nation was forcibly relocated there. The treaties that forced the Five Tribes to remove from their eastern homelands in the 1830s gave them roughly equivalent areas in Indian Territory, overlapping the eastern margin of the Great Plains.

The Five Tribes' three ribbons of Great Plains land included the Cherokee Outlet in the north, a strip between this and the Canadian River shared by the Creek and Seminole Nations, and a wide expanse between the Canadian and North Fork of the Red River owned by the Choctaws and Chickasaws (Texas began west of the North Fork). The Five Tribes' settlements clung to the safe, humid, accessible, alluvial valleys to the east, which left the Kiowas and Comanches to command their western lands.

Beginning in the 1850s western Indian Territory became a dumping ground for dispossessed Plains Indians. When the Chickasaws and Choctaws separated in 1855, they leased the western third of their domain to the United States to resettle Texas Indians. After the Civil War the Five Tribes were forced to cede their western lands to make room for new reservations. The eastern third of the Cherokee, Creek, and Seminole holdings was parceled among a diverse set of Native American refugees, creating a cluster of small, poverty-stricken reservations. The western lands of the Seminoles, Choctaws, and Chickasaws became reservations for the Cheyennes and Arapahos, Comanches, and Kiowas and Apaches, following their brutal suppression by the army in the 1860s and 1870s, which also coincided with the era of the cattle drives through the area.

By the 1880s reservation farming was largely unsuccessful, since the most rational land use for land-rich, capital-poor Indians was to lease land to white cattlemen. For quite different reasons, farmers and humanitarian reformers agreed that the communal land tenure on reservations had to end. In 1887 Congress passed the General Allotment (Dawes) Act, which required tribal members to select 160 acres of land for their own use, although title would be held for a period of years by the government. The acreage that remained was then opened to white settlement. The reservations of western Indian Territory were allotted in the late 1880s and early 1890s. This was immediately followed by land runs and lotteries that brought tens of thousands of white families to the region.