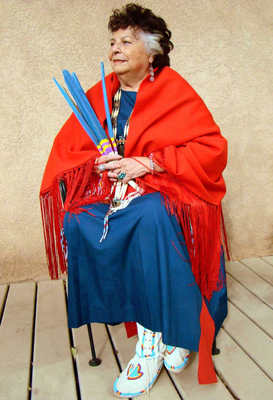 LaDonna Harris, a Comanche woman born in 1930 in Walters, Oklahoma, is a well-known political activist. Once shy and retiring, but nonetheless aware of the inequities of being an Indian in America, LaDonna blossomed during her marriage to Fred R. Harris, who was later a U.S. senator from Oklahoma and candidate for president. She put her personality and many talents to work as the founder of Oklahomans for Indian Opportunity (OIO), a Native American charitable and educational nonprofit organization. OIO expanded into civil rights activities in the 1960s and was the forerunner of Americans for Indian Opportunity, with its flagship Ambassadors program, a nationwide project headed by Harris. The Ambassadors project takes some of the nation's brightest and most promising young Indian professionals through an intensive one-year program aimed at rekindling and reinforcing the use of the tribal values in a modern context.

Harris's work takes her all over the country, including Washington DC, where she is well known in Congress as a fighter for, and defender of, Indian rights and programs. She is in demand as a speaker, both locally and nationally, and frequently leaves her home in Bernalillo, New Mexico, to travel in support of Indian issues. Publicly acknowledged by various Indian and non-Indian organizations as a successful activist, LaDonna remains at heart a Comanche woman and returns frequently to her Oklahoma roots, often accompanied by one or more of her three adult children and one grandchild, to draw strength and vitality from her heritage.