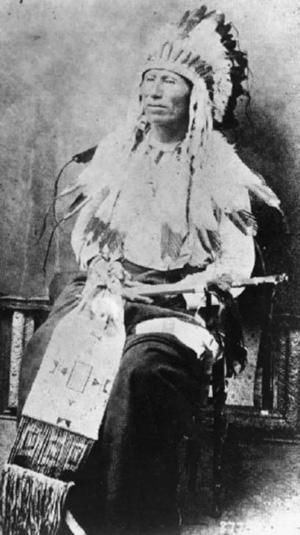 He was born in the rugged mountain country of Montana's Rosebud Valley at the beginning of the nineteenth century and died there near century's end. In between, the trajectory of his life encompassed the full sweep of Indian experience on the nineteenth century Northern Great Plains: warrior, chief, signatory to the Fort Laramie Treaty, statesman, reservation citizen, Cheyenne Outbreak leader, hunted quarry, starving survivor, tribal elder.

To his people, the Northern Cheyennes, he was called Wo'he Hiv', or Morning Star. As a boy, it is said that he showed uncommon bravery and leadership. As a young man, he joined in raids against the Crows, Arikaras, Snakes, and Shoshones, earning a reputation for fierceness and courage. On December 21, 1866, he and Lakota war chief Crazy Horse led a decoy party that helped wipe out Capt. William J. Fetterman and all eighty-one of his men. But not long afterward he began to believe war against the whites was hopeless. A gifted orator and skilled negotiator, he visited the forts, talked to the soldiers, and attended peace parleys, looking for a way out for his people.

In 1868 he was among the chiefs who signed the Treaty of Fort Laramie, agreeing he would never again "sharpen his knife" against the whites. Dull Knife, as he was now known, kept his word. Col. George A. Woodward, commander of Fort Fetterman, recalled an 1871 visit to the fort: "Of the three head-men of the Cheyennes, Dull Knife was, I think, greatly the superior. . . . His manner of speech was earnest and dignified, and his whole bearing was that of a leader with the cares of state."

In June 1876, while others left for the Little Bighorn, Dull Knife stayed in his camp a few miles southwest of the battle. Exactly five months after the Custer fight, a surprise predawn army attack wiped out much of his village. On April 21, 1877, after a winter sharing meager supplies in Crazy Horse's camp, Dull Knife and 553 of his people surrendered at Fort Robinson, Nebraska.

Five weeks later, Dull Knife and his Northern Cheyenne were forcibly marched to a reservation in Indian Territory. After a year enduring starvation, disease, death, and acute homesickness, Dull Knife and Little Wolf, another chief and the tribe's most capable warrior, decided to lead about 300 of their people north on a 1,000-mile freedom flight back to their Montana homeland. They left on September 9, 1878. Six weeks and more than 500 miles later–exhausted, hungry, cold, an estimated 2,000 troops in pursuit–they had made it deep into the Sandhills of northwest Nebraska, where the chiefs made a decision: Little Wolf and the stronger ones would continue to Montana; Dull Knife and the weaker ones would look for Red Cloud's nearby camp.

On October 23, the cavalry caught up with the weaker group, marching Dull Knife and 148 prisoners on a twenty-eight-mile trek to Fort Robinson. The post commander, Capt. Henry Wessells, told Dull Knife and four sub-chiefs on January 3, 1879, that a decision had been made: the Northern Cheyenne must return immediately to their Indian Territory reservation. "I am here on my own ground," Dull Knife replied, "and I will never go back. You may kill me here, but you cannot make me go back." On January 5, Wessells ordered all food and heating fuel withheld from the defiant Northern Cheyennes. Two days later, he cut off the water supply. Still, Dull Knife and his people refused to leave their barracks.

Shortly before 10 P.M. on the evening of January 9, with the temperature below zero and half a foot of snow on the ground, the Northern Cheyennes broke out of the barracks, fleeing for the protective bluffs across the White River. Skirmishes between the Northern Cheyennes and cavalry troops continued for two weeks. When the shooting ended on January 23, thirty-nine Northern Cheyenne men and twenty-five women and children had been killed. Dull Knife was not among them. He and several family members eventually made it to the safety of Pine Ridge Agency about sixty miles away, surviving the last few nights by eating the soles of their moccasins.

Later that year Dull Knife, then about seventy, was allowed to return to Montana. In November he rejoined Little Wolf, who–after a journey of seven months and more than 1,000 miles–had made it safely back. Dull Knife died of natural causes in his Rosebud Valley homeland in 1883. About a year later, on March 26, 1884, the U.S. government officially set aside a tract of Montana land as the permanent home of the Northern Cheyennes.