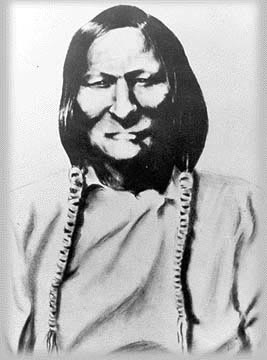 Black Kettle (Moketavato) was a leading chief of the Southern Cheyennes through the difficult years of the 1850s and 1860s. Born in the Black Hills before that area was part of the United States, Black Kettle married a woman of the Wotapio band and lived with his wife's people, as was customary. When the chief of that band, Bear with Feathers, died in 1850, Black Kettle was elected chief. In time, Black Kettle married another three women, all sisters to his first wife, and with them Black Kettle had seventeen children.

Black Kettle was a "Peace Chief," dedicated to strong leadership through nonaggression. After the discovery of gold in Colorado in 1858, the hunting lands of the Southern Cheyennes became increasingly encroached upon by Americans, and resentment developed on both sides. In 1864 Black Kettle and his band, which had avoided hostilities and tried to forge a peace, were camped on Sand Creek, an intermittent tributary of the Arkansas in present-day Kiowa County, Colorado (now called the Big Sandy). On November 28, Col. (and Reverend) John M. Chivington, with 600 to 1,000 men of the Colorado Volunteers, mounted a surprise attack on the village. As Black Kettle hoisted a white flag and an American flag in an attempt to stop the violence, Chivington's men massacred between 100 and 200 Indians, mainly women and children.

The Cheyennes retaliated by killing several hundred settlers during the following four years. Black Kettle worked to reestablish peace. His mark, for example, appears second on the Treaty of Medicine Lodge Creek of October 28, 1867, an attempt to establish peace on the Central and Southern Plains. But Black Kettle's efforts all came to nothing on November 27, 1868, when his sleeping village on the Washita River, in present-day Roger Mills County, Oklahoma, was attacked by troops led by George Armstrong Custer. Black Kettle and more than 100 of his people were killed.