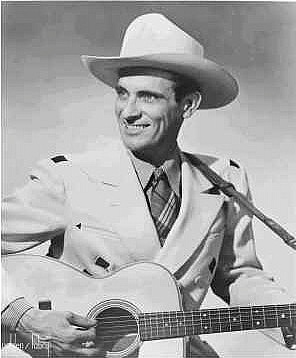 Ernest Dale Tubb, popular and influential country music singer, was born in Crisp in rural Ellis County, Texas (near Dallas), the youngest of five children in a sharecropping family. His family picked cotton there during the prosperous World War I years and then in about 1920 moved west to the High Plains, pulling cotton in and around Benjamin, Texas. Cowboy music performed by Jules Verne Allen and others was one early influence on Tubb, but his main formative influence was the music of recording star Jimmie Rodgers. Later, while working a succession of radio jobs in San Antonio, San Angelo, Corpus Christi, and Fort Worth, Tubb was influenced by contemporaries such as Rex Griffin, Tommy Duncan, Al Dexter, Floyd Tillman, Ted Daffan, and Moon Mullican. He failed as a Jimmie Rodgers clone on Bluebird Records (1936-37) but developed his own warm, drawling, honky-tonk singing style and a growing following through selfwritten song hits on Decca Records after 1940, especially 1941's "Walking the Floor over You."

Tubb worked in four Hollywood films of the 1940s–two Charles Starrett Westerns for Columbia Pictures and two musical variety films–and moved his base of operations from Texas to Nashville's Grand Ole Opry in 1943. He remained one of the show's biggest stars for the rest of his career and is legendary for the professional helping hand he extended to others, including Hank Williams, Hank Snow, Charlie Walker, Johnny Cash, Stonewall Jackson, the Wilburn Brothers, George Hamilton IV, duet partner Loretta Lynn, and his own one-time Texas Troubadours bandsmen Jack Greene and Cal Smith. Emphysema ended his long career in 1982, and two years later, on September 6, 1984, in Nashville, it took his life. During his seventy years he won all the honors the country music world can bestow, including election in 1965 as the sixth member of the Country Music Hall of Fame.