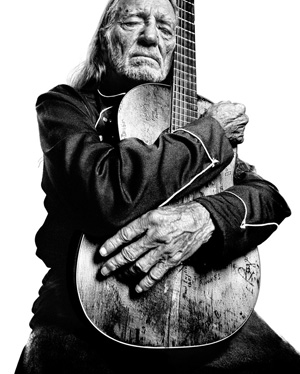 Willie Nelson is among America's best-known country music stars. He was born in Abbot, Texas, on April 30, 1933, to Ira and Myrtle Nelson. Nelson's mother abandoned the family when he was five years old, and he and his sister, Bobbie Lee, were raised by their paternal grandparents. The family was musical, and both children studied music through mailorder courses bought by their grandparents. At age six Willie received his first guitar from his grandfather.

Nelson's first musical performance came at age ten, accompanied by Bobbie Lee on piano. By the time he left high school he had his own radio show. After a brief career in the air force, he worked as a DJ and began writing songs, including "Family Bible" and "Night Life." His marriage, the first of several, fell apart, but his career began to climb as his writing ability was quickly recognized. He moved to Nashville in 1959, selling songs to Faron Young ("Hello Walls") and Patsy Cline ("Crazy"). Although his songs were popular when others performed them, Willie himself never found fame as a performer in Nashville. He took the burning of his home there in 1970 as a sign and returned to Texas.

In Texas he began working on his own music, gradually creating a distinctive style that mixed the sound of classic country with a hippie sensibility and earning a reputation as a musical outlaw. His two best-selling albums– Shotgun Willie (1973) and Phases and Stages (1974)–came out during this era. In 1975 he switched to Columbia, which remained his label until the 1990s. His first album for the new label, Red-Headed Stranger (1975), proved to be a breakthrough, confirming his image as an outlaw and romantic hero.

In addition to musical performances, Nelson also acted in several films, including The Electric Horseman (1979), Honeysuckle Rose (1980), for which he also contributed the soundtrack, Barbarossa (1982), and Wag the Dog (1997), among others. Nelson founded and has served as the president of Farm Aid, the nearly yearly musical benefit for American farmers. Farm Aid concerts have raised millions for struggling farmers and have taken place in cities from Austin, Texas, and Lincoln, Nebraska, to Columbia, South Carolina.

From 1984 to 1993 Nelson unsuccessfully battled the IRS over $16.7 million in taxes and fines dating back to 1972. Nelson blamed the accounting firm of Price Waterhouse for the mistakes. He eventually settled with the agency. In 1994 he was arrested after police found marijuana in the ashtray of his pickup truck. The search was illegal, and the charges were dropped.

Nelson's career has been propelled by his own intense energy. He has recorded more than 100 albums, written his autobiography, and maintains a grueling concert schedule. His status in American culture is that of pop icon; he has even been the subject of a novel (Richard "Kinky" Friedman's Road Kill [1997]). Nelson actively campaigns for farm relief, even testifying before Congress, as well as for the legalization of marijuana. He has cited Mexican American music, blues, western swing, and Frank Sinatra as part of a large list of musical influences; his own work has ranged from country and pop to blues and gospel.