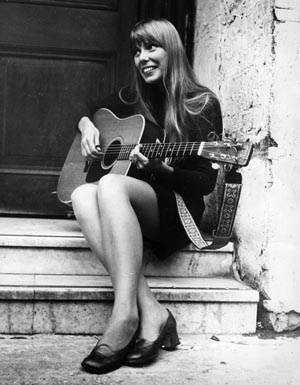 Singer, songwriter, guitarist, and pianist Joni Mitchell was born Roberta Joan Anderson on November 7, 1943, in Fort Macleod, Alberta. She grew up in Saskatoon, Saskatchewan. Mitchell studied art for a year in Calgary and then moved to Toronto, where, with her husband, Chad Mitchell, she began to write songs and sing in coffeehouses. She moved to Detroit in 1965 and to New York in 1966 and then settled in Los Angeles in 1968 with a second home near Vancouver.

Mitchell made her reputation initially as a songwriter. Judy Collins recorded Mitchell's song "Both Sides Now" (1967), and other Mitchell songs have been recorded by Gordon Lightfoot, Bob Dylan, and Frank Sinatra. Seventeen albums over thirty years, with a Grammy for Clouds (1969), have moved from the folk styles of her coffeehouse origins through the jazz influences of the 1970s and the rock styles of the 1980s to a return to a simpler folk-based style in the 1990s. Mitchell has maintained a long, independent career, and the style of her lyrics and melodies has been influential. In 1979 she said of her music that it had a striding quality that was like long steps across the flat prairies, but she also acknowledged the increasingly urban influences of jazz and rock. Her lyrics since the early 1970s have been autobiographical, dealing with the pain of love, loneliness, and modern life. Although she has made her career in the United States, many of her songs reflect the point of view of the outsider, a Canadian who can never fully be a part of life in Los Angeles and yet can also never return to her small town Plains roots.