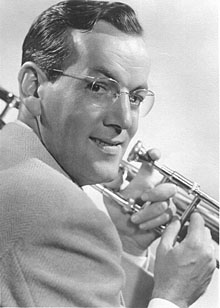 The man who would become one of America's best-loved bandleaders was born in Clarinda, Iowa, on March 1, 1904. Alton Glenn Miller's homesteading parents then decided to try their luck in Nebraska; in 1907 they packed up their family and moved into a sod house in the very small town of Tryon. After another move to Missouri the family wound up in Fort Morgan, Colorado, where Miller developed an interest in dance band music. He was talented enough on the trombone to support himself in orchestras through two years at the University of Colorado and in 1924 moved to Los Angeles to play full time in the Ben Pollack Orchestra.

Miller considered himself a mediocre trombone player at best. His real ambition was to make new arrangements of tunes others had written and to use his arrangements to develop a recognizable style for a band of his own. After stints with other big names in the 1930s, including Ray Noble and the Dorsey brothers, he set out to form the first Glenn Miller Band. This one failed, but on his next attempt in 1939 he landed a summer slot at the Glen Island Casino, a big band hot spot with a nationwide radio hookup. Within months, Miller had a national following. Hit after hit followed, beginning with "In the Mood" and including the first gold record ever awarded, for "Chattanooga Choo Choo." The band also made two movies by 1942, giving fans in the hinterlands a chance to see them in action.

World War II intervened, and as Miller saw his young bandsmen joining up or being drafted out of their chairs he wanted to do more for his country. He pestered the army until they gave him a captain's commission and a fifty-member band, complete with a string section, something his civilian band did not include. His morale-building duties included modernizing military music, notably with the "Saint Louis Blues March," and making numerous radio broadcasts and war bond drives.

Miller lobbied hard to take his band overseas to play for the Allied troops in Europe. The army relented in the summer of 1944; for the next six months the Glenn Miller Army Air Force Band kept a relentless schedule of base concerts and radio broadcasts in England. Wanting to get closer to the troops who would most enjoy the little bit of home his music brought them, by-now-promoted Major Miller was making plans to bring his band to Paris when his light plane disappeared over the English Channel on December 15, 1944. Rumors persist that the plane was brought down by friendly fire, most likely by bombs jettisoned by a Royal Air Force squadron flying above it.

The band continued without him and, after several changes in personnel and name, still tours today. Miller's songs are swing band classics, and fan clubs in America and England continue to attract new members. His signature tune, "Moonlight Serenade," the only one of the band's hits written by Miller, evokes the romantic, patriotic, and musical war years yet remains instantly recognizable today.