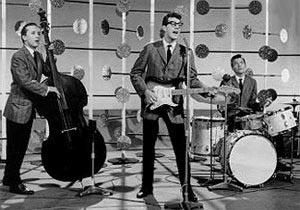 Buddy Holly and the Crickets

Buddy Holly was born Charles Hardin Holley on September 7, 1936, in Lubbock, Texas. He removed the e from his last name in 1956. The famously bespectacled Holly, along with his band, the Crickets, was among the most innovative and influential pioneers of rock and roll music, an amalgam of white country and western and black rhythm and blues styles.

The youngest of four children, Holly followed his mother and siblings in learning to play a variety of instruments (guitar, violin, and piano) to accompany country and western and gospel singing. That early influence was later modified by exposure to the black rhythm and blues music he enthusiastically listened to on late-night radio. Further reinforcement came from rock and roll trailblazers Bill Haley and Elvis Presley, for whom Holly opened concerts in Lubbock in 1955.

Holly was brought to the attention of Decca Records through the efforts of an agent, Eddie Crandall, leading in 1956 to commercial recording sessions in Nashville with country and western producer Owen Bradley. Bradley's attempt to force Holly's unique style into a Nashville mold in releases such as "Blue Days, Black Nights" met with little success. Discouraged by the experience, Holly and the Crickets (drummer Jerry Allison, bassist Larry Welborn, and guitarist Niki Sullivan) collaborated in February 1957 with Clovis, New Mexico, performer, producer, and recording engineer Norman Petty to record their first hit record, "That'll Be the Day," in Petty's studio. The recording, released on Brunswick Records, reached number one on the American charts by September; it also topped the British charts. Other hits followed quickly in 1957: "Oh Boy!" and "Peggy Sue," released on the Coral label, rose to the Top 10. The hit records led to additional recording sessions and national tours, including the first performance by a white band at the Apollo Theater in Harlem and television appearances on American Bandstand and The Ed Sullivan Show.

The year 1958 brought a flurry of recording sessions with Petty and tours to Hawaii, Australia, and England. Holly's influence on the following generations of English rock stars was massive: Paul McCartney and Keith Richards later testified to his profound impact on the nascent Beatles and Rolling Stones in the BBC documentary The Real Buddy Holly Story. On August 4, 1958, Holly and Maria Elena Santiago married. They had no children. In late 1958 Buddy and Maria moved to Greenwich Village, following the dissolution of his managerial arrangement with Petty and the decision by the Crickets to pursue an independent future. In New York Holly resumed writing songs, emphasizing his role as a soloist, and undertook the promotion of other promising young artists, including Waylon Jennings.

A midwestern tour led to the fatal crash on February 3, 1959, of the small plane in which Holly and two other young performers (the Big Bopper and Richie Valens) were attempting to fly from their engagement in Clear Lake, Iowa, to Fargo, North Dakota. More than 1,100 people gathered for Holly's funeral in Lubbock. The hits continued after his death, with the lonesome and defiant "It Doesn't Matter Anymore" climbing to number one in the United Kingdom. Holly was a member of the first group of inductees into the Rock and Roll Hall of Fame in 1986.

Holly's legacy includes the band format of two amplified guitars, bass, and drums, the practice of the artist performing mostly his original compositions, and even the wearing of glasses onstage. Techniques developed in collaboration with Norman Petty–overdubbing, artificial reverberation, and the use of piano, celesta, drumming on a cardboard box, and knee slapping–were later mimicked by others. Also characteristic of his musical style are the rhythmic subdivision of a single syllable (we-e-e-ell, he-he-he-hey), extreme shifts of vocal register, intense guitar strumming with consecutive downstrokes, and the pervasive driving percussion of Jerry Allison.