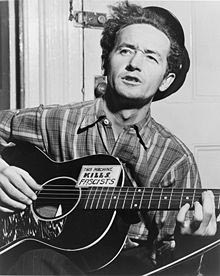 Woodrow Wilson, or Woody, Guthrie was born in Okemah, Oklahoma, on July 14, 1912. His formative years exposed him to middleclass circumstances in a wild and restless boomtown, although his family life unraveled by 1927. His father, Charlie, became an alcoholic, while his mother, Nora, suffered from Huntington's chorea and was committed to a mental institution.

Relocating to Pampa, Texas, in 1929, Guthrie met and married his first wife, Mary Jennings. While listening to the voices emanating from the region, he developed his musical talents and appropriated cowboy songs, gospel hymns, and hard-luck blues for his repertoire. Soon he discovered a new life as a rambling minstrel, playing folksy songs on his guitar at country dances, rodeos, and carnivals.

In 1937, after experiencing firsthand the blistering heat and sandstorms of the Dust Bowl, Guthrie left his family and took to the road. He arrived in California, where a relative helped him find work. The boom in country music on the radio brought ballads to KFVD in Los Angeles, California, and listeners enjoyed folk songs that described a distant homeland and "cornpone" philosophy. While referencing experiences seemingly long ago and far away, Guthrie's lyrics summoned an audience's recollections of hard times in the heartland. From the beginning of his musical career, he was dubbed the Dust Bowl Troubadour and the Okie Balladeer. After a divorce from his first wife, he married Marjorie Mazia in 1945.

While playing the restless saloon singer, Guthrie matured into a visionary artist. He wrote a column for the People's Daily World and crafted poetry, a novel, and an autobiography. Composing more than 1,000 songs, he sang of the Dust Bowl, President Roosevelt's New Deal, antifascist patriotism, union organization, and child's play. His titles ranged from "Jesus Christ" to "Union Maid." His working-class heroes traveled with him in the classic anthem "This Land Is Your Land." Over the course of his journey, he collaborated with Maxine "Lefty Lou" Crissman, Pete Seeger, Leadbelly, Burl Ives, Cisco Houston, and Alan Lomax. By the 1960s, Guthrie had become a legendary icon for a younger generation of protest musicians, including Bob Dylan and Joan Baez. His influence is still seen in the more contemplative songs of Bruce Springsteen.

Guthrie identified with the "Dust Bowl refugees" of the Great Plains and, in efect, reinvented himself. Through the chords of memory he articulated a collective search among plain-folk Americans for a better life. While musing that socialism offered a new hope for this kind of proletariat, he sang about a primitive rebel in a nascent state. The wiry balladeer came to embody the rambling Okie of his songs. After suffering for fifteen years from Huntington's chorea, he died in New York on October 3, 1967.