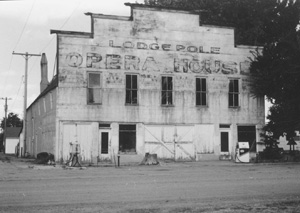 Frontier communities regarded opera houses as visual symbols of prosperity–ence, promise, and culture. Though more properly "opera hall," the name "opera house" suggested refinement and elegance to local residents, so it prevailed. The opera house heyday lasted from about ten years after a town's founding until approximately 1917. Often on the second floor of the town's first brick building, opera houses contained an open space large enough for a significant portion of the community to congregate. All contained stages, some had permanent seating, but most consisted of a large room that could be arranged in a variety of configurations depending on need–dances, political meetings, banquets, basketball games, concerts, home talent shows, or professional entertainment.

Opera houses represented all types of vernacular Main Street architecture from the early two-part commercial block second-floor theaters to the one-part community auditorium models favored in the early twentieth century. These theaters functioned as the heart of frontier society, gathering places where folks could celebrate life and escape its daily rigors. Originally owned and managed by a civic-spirited merchant, they eventually passed into public ownership.

Opera houses declined as a performance venue after 1917 for a variety of reasons related to twentieth-century technology. Many had reached the end of their architectural usefulness and could no longer safely support large crowds of people; the devastation of the 1903 Iroquois Theatre fire in Chicago, which killed 600 people, made the nation aware of the dangers of second-floor theaters. Automobiles, shifts in population, and postwar affluence meant smaller audiences in small towns. Most important, motion pictures proved more attractive to audiences and more cost-effective to managers than traveling troupes. Plains towns built no true frontier opera houses after World War I. Today, small Great Plains towns use community auditoriums to fill the nonentertainment functions of the opera house, while larger cities and television provide the performance venues.