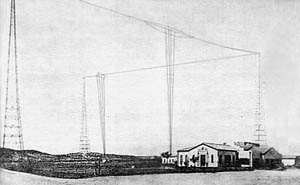 XERA, one of the border blasters near Del Rio, Texas. (www.modestoradiomuseum.org)

In Mexico, where wildcat station owners were unfettered by the Federal Communication Commission's regulations on wattage output, stations like XERA could transmit in excess of 500,000 watts. In the Great Plains, where the level topography of the land means that radio waves are usually obstructed only by the curvature of the earth, signals (particularly AM frequencies) can travel hundreds, sometimes thousands of miles before fading out. The result was a string of stations just across the Mexican border that garnered massive audiences.

Border radio stations were huge moneymakers for station owners who sold programming time, fundamental evangelists, and a stunning array of entrepreneurs who used the airwaves to run mail-order businesses. On the artistic side, music ranged from country and gospel to conjunto and rhythm and blues, and musicians like Bob Wills used border radio to widen their audiences. From 1938 to 1939 the Carter family actually lived in Mexico and broadcast live on border radio stations. The stations' massive radius of air coverage also allowed them to serve as a platform for numerous self-made celebrities. Flour salesman Wilbert Lee "Pappy" O'Daniel used border radio to become a western swing music impresario and later governor of Texas. A young disc jockey named Bobby Smith created the persona of Wolfman Jack in the mid-1960s on XERF, where he also served as station manager. He soon parlayed this into national success.

A 1968 Mexico-U.S. treaty finally put a cap on border station wattage. However, nostalgia over these stations has been celebrated in song by the likes of zz Top ("Heard It on the X"), John Hiatt ("Pirate Radio"), and Dave Alvin ("Border Radio").