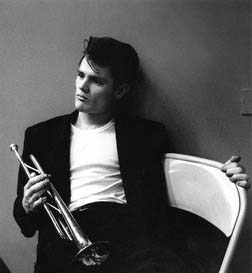 Chet Baker was a jazz trumpeter and extraordinary musical stylist who helped define the "cool jazz" era of the 1950s. He was born in Yale, Oklahoma, on December 23, 1929. When he was about eleven years old his family moved to California, where the cool jazz movement would later thrive. Baker developed his trumpet-playing ability in the Glendale High School band and in the army. His philosophy of jazz was formed in the jazz clubs along Central Avenue in Los Angeles. In 1951, after his second discharge from the army, he began playing with Charlie Parker after winning an audition that Parker had staged at the Tiffany Club.

But it was Gerry Mulligan, a popular arranger and composer during the 1940s, who launched Baker's career with the Mulligan quartet in 1952. Theoretically, this unique quartet, which consisted only of bass, drums, baritone saxophone, and trumpet but excluded piano and guitar, should have had a thin, dead sound, with limited possibility for creativity. However, due to the players' talent and vision, the Mulligan quartet was very well received, and Chet Baker became famous. He was even named the best trumpeter of 1954 by Down Beat magazine. Baker was a member of the Mulligan quartet for only one year. Despite a drug dependency, he maintained a steady international solo career from the time he left the quartet until his mysterious death on May 13, 1988, when his body was found on the sidewalk in front of his hotel in Amsterdam.

Chet Baker is remembered for his velvety tone, his uncanny ability to create beautiful musical lines during improvisation solos, and his masterful phrasing. He was also well known for his smooth, laid-back singing voice. With his handsome face, rebellious gaze, and interpretation of songs like "You've Changed" and "My Funny Valentine," he personified cool and radiated romance.