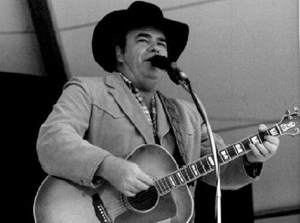 Singer, songwriter, guitarist, and actor Hoyt Axton was born on March 25, 1938, in the small town of Duncan in southwestern Oklahoma. He was the son of Mae Boren Axton (1915–97), who cowrote the 1956 Elvis Presley hit song "Heartbreak Hotel." A football scholarship led to Oklahoma University, though he left in the late 1950s to join the navy.

Axton began writing and performing on his own in West Coast music clubs during the burgeoning folk music revival of the late 1950s and early 1960s. While he built up a loyal following on the folk club circuit, he remained relatively unknown until his song "Greenback Dollar" was recorded by the Kingston Trio in 1962; it led to a recording contract with Horizon Records and albums such as Balladeer (1962), Thunder 'n' Lightning (1963), and Saturday's Child (1963).

The popular rock band Steppenwolf recorded Axton's song "The Pusher" in 1964; it rose to the top levels of the pop charts and was eventually included in the sound track of the 1969 film Easy Rider. In the mid-1960s Axton became interested in acting and performed in the television series Bonanza, Bionic Woman, and McCloud. His later motion picture roles included parts in Black Stallion (1979), E.T. (1983), and Gremlins (1984). He was also a guest on many television talk and variety shows.

The rock band Three Dog Night recorded Axton's "Joy to the World" and "Never Been to Spain" in 1971 and took him on tour as an opening act. Concert tours of the United States, Europe, and Asia followed, along with the recording of many more albums. His songs have also been recorded by Waylon Jennings, Glen Campbell, John Denver, and Ringo Starr. Hoyt Axton died on October 26, 1999, at his home in Victor, Montana.