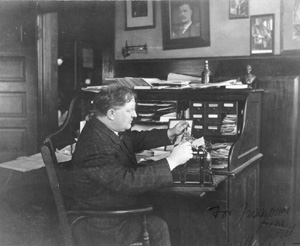 A Saskatoon-based weekly newspaper founded in 1924, the Western Producer began publishing in 1923 as the Progressive. Founders Harris Turner and Pat Waldren proposed establishing a newspaper to the Saskatchewan Grain Growers Association (SGGA), which eventually endorsed the venture, providing $7,000 in loans and 5,000 subscribers. In return, the SGGA was granted three places on the five-member editorial board. To encourage members of the recently created Saskatchewan Wheat Pool (SWP) to subscribe and to avoid association with the federal Progressive Party, the paper's name was changed, printing its first edition under the Western Producer banner in September 1924.

Despite the influence of the SGGA, the Western Producer became known for its objective, nonpartisan, high-quality reporting. Among its many influential journalists was Violet McNaughton, a prominent SGGA member and woman's rights advocate.

The Western Producer continues to perform vital economic, political, and social functions. In addition to providing agricultural news, the paper includes sections for youth, women, and rural society in general. The Western Producer has had a considerable influence on Prairie society and simultaneously embodies Prairie farmers' independence and cooperative spirit.