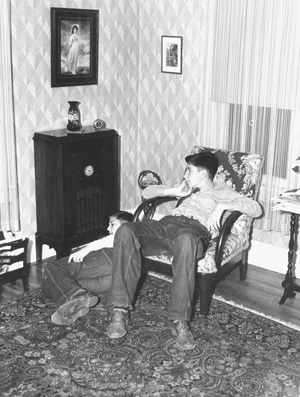 There was a great deal of enthusiasm about the arrival of radio. When KDYS in Great Falls, Montana, went on the air in 1922 nearly 800 people crowded around a single radio at a local store to hear the first broadcast. The broadcast was cut short by a mechanical failure, and the radio station went off the air the following year, but the event signified the popularity of radio.

The region's residents eagerly welcomed radio because it reduced boredom and isolation and helped them feel connected with the rest of the country. Rural communities listened to the same news and entertainment programs heard by the rest of the nation. Rural families in the Great Plains, like other families in America, would gather around the radio to listen to their favorite evening programs. NBC was heard over KFYR in Bismarck and KOA in Denver. In Omaha, KOIL aired the NBC Basic Blue Network, while wow aired NBC Basic Red. CBS was heard over KLZ in Denver, WNAX in Yankton, and WIBW in Topeka. WBAP in Fort Worth aired NBC programming but also carried the Texas Network.

Regional and local radio stations offered a variety of programs that targeted local audiences. Religious services were broadcast for people who could not leave the farm for Sunday services. Educational programs were broadcast from stations such as KOOW of the Oklahoma College for Women in Chickasha, Oklahoma, and KFJM from the University of North Dakota in Grand Forks. The U.S. Department of Agriculture (USDA) recognized the important benefits of radio and sponsored a number of programs that provided radio stations in rural areas with up-to-date agricultural and household information. The USDA programming provided a cost-effective way for small local stations to fill their schedule. Women were a particularly important market because radio provided companionship during routine daily chores. Home economists working for the USDA, the Rural Electrification Administration (REA), and other groups provided a variety of radio programs that targeted women in rural locations.

A radio was generally inexpensive to own and operate, and in most cases the purchase of a single radio provided years of service. Battery-powered radios were a common appliance in rural homes, and the battery from the family automobile was a useful way to power the radio. The automobile was parked on an incline before the battery was removed so the car could be rolled to a start if the power of the battery had been drained by an evening of listening to the radio. Most rural listeners developed recharging systems to maintain the battery's power. The arrival of REA power during the late 1930s through the early 1950s allowed rural residents to switch to AC-powered radios. REA reports indicate that the AC radio was the most frequently purchased household electrical appliance of new REA electrical users.

In addition to its popularity as a form of entertainment, radio brought significant economic benefits to the Great Plains. Two informational benefits of radio were critical to the economic lives of Great Plains residents. First, the accuracy and availability of weather reports improved. Residents were alerted about approaching violent weather in their immediate area. Weather changes were more accurately tracked as local forecasting improved. This was especially important when deciding a planting or harvesting schedule or when to gather or release livestock. The second major informational benefit of radio was the availability of up-to-date market reports. As early as 1922, KFKA in Greeley, Colorado, regularly provided information about livestock prices in Denver. Radio provided rural communities and residents access to accurate and timely trade information. Decisions about when to buy and sell products and commodities were based on the latest market information from Chicago, Denver, Fort Worth, Kansas City, and other regional trade centers. Radio gave Great Plains residents a greater sense of freedom and control over their economic lives.

Radio also provided local businesses with an advertising medium that could reach into remote areas of their communities and expand their markets. Seed, tires, batteries, and other important farm goods were advertised over the radio, as were household items and clothing. For example, the Gurney Seed and Nursery Company of Yankton, South Dakota, purchased WNAX radio for $2,000 in 1927 and developed a strong local clientele and mailorder business by advertising a wide variety of goods over the radio. The company developed and sponsored some of the most popular music programs in the state and was one of the first stations to feature Great Plains musicians such as the Lawrence Welk Band.

Radio delivered entertainment, companionship, education, religion, weather reports, market reports, and a wide variety of informational programs that made life in the Great Plains easier and more enjoyable. Radio allowed the residents of the Great Plains their first opportunity to feel as though they were in tune with the rest of the nation. The arrival of television in the 1950s and 1960s and the continued development of advanced media delivery systems eventually diminished radio's importance in the region.