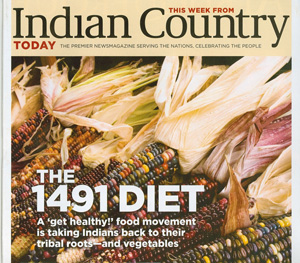 Front-page snapshot of an issue of Indian Country Today newspaper

Indian Country Today is the most widely circulated and arguably the most influential Native newspaper in the world. Tim Giago (Nanwica Kciji, or Defender), Oglala Lakota, established the weekly paper in 1981 as the Lakota Times. Giago, born in 1934 on the Pine Ridge Reservation and educated at the Holy Rosary Mission School there, served in the U.S. Navy after high school. He attended San Jose State College in California and earned his bachelor's degree from the University of Nevada-Reno. Giago worked a variety of jobs before becoming an Indian affairs columnist for the Rapid City Journal in Rapid City, South Dakota, in 1979; he later became a full-time reporter. In 1981 he established the Lakota Times to provide news coverage for Pine Ridge. The paper expanded to cover other reservations in the upper Midwest and by 1986 was distributed to all reservations in South Dakota, North Dakota, Nebraska, and Montana. Unlike most Native American papers, which tend to focus on one tribe or reservation, the Lakota Times focused on all tribes and reservations. The paper's offices moved to Rapid City in 1989, and in 1991 the Lakota Times claimed a readership of 50,000. By 1999 circulation had reached 77,000, with pass-along readership estimated to be as high as 100,000.

With support from the Gannett Corporation, publisher of USA Today, Giago expanded to national coverage in 1992 and changed the name of the paper to Indian Country Today. The paper operated bureaus in Albuquerque, New Mexico, and Spokane, Washington, and used freelance reporters to cover other regions. Giago has used the paper and pieces written for national publications such as USA Today, the New York Times, and Newsweek to defend Lakota and other Native American interests. He may be most widely known for criticizing the use of Native Americans as sports team mascots.

Standing Stone Media, Inc., an operation of the Oneida Indian Nation of New York State, bought Indian Country Today in December 1998. Corporate headquarters moved to New York, but editorial headquarters remain in Rapid City. The independent paper's sale to a tribal entity raised concern among some members of the Native American Journalists Association, who feared the Oneidas might restrict the paper's editorial voice. Early indications, however, show that the tribe is not changing the paper's editorial process. The paper maintains a bureau in Washington dc and has reporters in the Southwest, California, Oklahoma, and the Northeast. An expanding pool of correspondents provides national coverage. The paper now claims distribution in all fifty states and seventeen foreign countries, and it operates an on-line version.