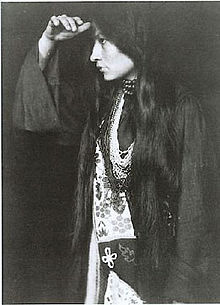 Zitkala Ša, a Yankton Sioux, was among the first Native American authors to tell her own story without the aid of an editor or translator, and she was a significant figure in pan-Indian politics during the first part of the twentieth century. She was born Gertrude Simmons on February 22, 1876, on the Yankton Reservation in South Dakota. As a little girl, at the enticement of missionaries, she left her mother and homeland to attend boarding school. In compelling narratives published in the Atlantic Monthly and Harper's Magazine in the early 1900s, Gertrude described her life on the reservation and her experiences in White's Manual Labor Institute boarding school in Indiana and as a teacher at Carlisle Indian School in Pennsylvania. She also published short stories and a collection of traditional Sioux tales, Old Indian Legends (1901). Gertrude renamed her literary and public persona Zitkala Ša, or Red Bird.

In 1901 Gertrude returned to the Yankton Reservation, where she met and married Raymond Bonnin. They worked for the Indian Bureau on the Uintah and Ouray Reservation in Utah, where Gertrude collaborated with William Hanson on the Sun Dance Opera (1913) and became involved with the Pan- Indian Society of American Indians. After she was elected secretary in 1916, she and Raymond moved to Washington dc, where she worked for the society and edited and wrote for American Indian Magazine.

In 1921 she published her earlier writings along with several new, more political pieces in American Indian Stories. With Raymond, she continued her activism, lobbying for the American Indian Citizenship Act of 1924, against violence and injustice on reservations, and for land claims and tribal rights. Zitkala Ša died on January 26, 1938, in Washington DC. She was buried in Arlington National Cemetery.