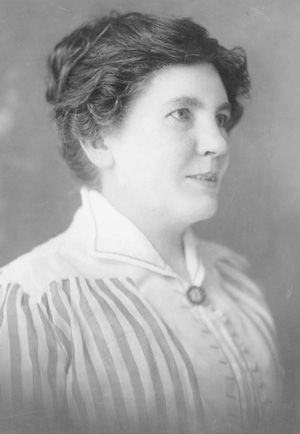 Laura Ingalls Wilder was born in a log cabin near Pepin, Wisconsin, on February 7, 1867. She subsequently lived in Kansas, Minnesota, Iowa, and South Dakota before settling in her final home in Mansfield, Missouri, in 1894. She died there on February 10, 1957.

The Little House series, Laura Ingalls Wilder's eight-volume set of autobiographical novels for children (1932–43), is arguably the most influential twentieth-century narrative of female childhood and adolescence on the western frontier. On their publication during the Great Depression, these books were almost immediately canonized as children's "classics," and they have shaped generations of children's and adults' beliefs about European American settlers' lives on the nineteenth-century Great Plains.

Wilder was a sixty-five-year-old Missouri farm woman with a long working life as housekeeper, poultry woman, teacher, and journalist behind her when the first Little House book was published in 1932. Her (unacknowledged) collaborator and adviser was her daughter, nationally known writer Rose Wilder Lane. Much of the power of the Little House series comes from the immediacy of its autobiographical protagonist: it places a spirited girl at the center of the cultural controversies of the 1870s and 1880s Great Plains. In the first book, Little House in the Big Woods (1932), Laura Ingalls is four, experiencing the satisfying rhythms of settled farm life with her young parents and sisters. In Little House on the Prairie (1935), Pa tires of the Wisconsin farm's predictabilities and persuades his dubious wife to move to Kansas "Indian country," where they settle illegally on Indian lands. Laura is intensely curious about their Native American neighbors, whom Ma fears and hates and Pa (sometimes) admires and emulates. She discovers a passion for the Great Plains country of waving grasses and no visible boundaries. When, after laboriously constructing a little log house, the Ingallses are ordered off their claim by the U.S. government, they backtrack to Minnesota and, in On the Banks of Plum Creek (1937), settle on a farm near an established town. Church and school offer cultural advantages, and Laura's domestic education intensifies. But the Ingallses are beset by drought, grasshoppers, and illness, and by the next book (By the Shores of Silver Lake, 1939) are glad to leave for a new western homestead in Dakota Territory. In this and the three following books, adolescent Laura learns the boundaries of women's and men's work in a frontier town, surviving blizzards in The Long Winter (1940) and, in Little Town on the Prairie (1941), seeking adult occupations that engage her energy and agency. The series ends, in These Happy Golden Years (1943), with the interwoven stories of Laura's first adult professional success as a schoolteacher and her courtship and marriage to a young homesteader, Almanzo Wilder.

The Little House series engages important issues of European American settler culture in the Great Plains: the competition of Ma's settled domesticity and Pa's westering wanderlust; the broached and botched possibilities of intercultural contacts between frontier Americans of different races and ethnicities; the gendered alternatives of work, consumption, and courtship offered to female children and adolescents in Plains towns. Recently, critics, historians, and biographers have debated whether Wilder's series confirms or questions the Turnerian account of the settling of the American West, have scrutinized constructions of gender and domestic culture in the series, and have argued about the extent and importance of Rose Wilder Lane's collaboration. Meanwhile, the Little House series has continued to spawn cultural spin-offs that attest to the persistent freshness and importance of this canonical Great Plains narrative.