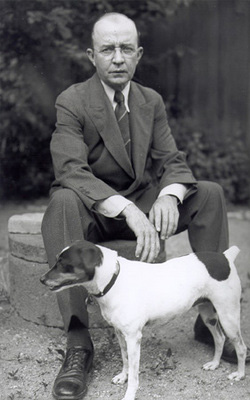 A child of the Great Plains, Walter Prescott Webb was one of the preeminent historians of the region and of the American western frontier. He was born on April 3, 1888, in Panola County, East Texas, on the southern fringe of the Great Plains and grew to manhood in the farmland of the Stephens-Eastland Counties area of West Texas. After graduating from high school and before going on to the University of Texas at Austin for his higher education in 1909, Webb taught in several of the local country schools. At the University of Texas he completed his bachelor's degree in history in 1915 and became a member of the history faculty in 1918. He became a particularly close friend of the western writer J. Frank Dobie and the Texas naturalist Roy Bedichek while at the University of Texas.

Webb earned his master's degree from the University of Texas in 1920, writing his thesis on the Texas Rangers. In 1922, at the age of thirty-four, Webb took a leave of absence from his faculty duties to pursue a doctorate in history at the University of Chicago, but he failed to complete the degree and returned to Austin a year later. Webb finally received his doctorate from Texas in 1932, having submitted the previously published The Great Plains (1931) as his dissertation. For his many scholarly achievements (he wrote or edited more than twenty books), the University of Chicago presented him with an honorary doctorate of laws in 1958. Among his accomplishments were the books The Texas Rangers (1935), Divided We Stand (1937), and The Great Frontier (1952). Webb was a Harkness Lecturer at London University in 1938, the Harmsworth Professor of American History at Oxford University in 1942–43, president of the Mississippi Valley Historical Association (Organization of American Historians) in 1954–55, and president of the American Historical Association in 1958.

Webb drew much of his love and understanding of the Great Plains from his own life and the writings of historians of the American frontier, especially Frederick Jackson Turner. In The Great Frontier, Webb even went so far as to expand Turner's ideas on the lure of the frontier into a global arena. But clearly Webb's major work was The Great Plains. It is a pioneering work not only in regional and frontier history but also in environmental history and historical geography. Webb argued that the frontier of settlement halted at the eastern edge of the Great Plains (he called it a "cultural fault line") because European American institutions and settlers were not prepared for a semiarid environment with few trees and less water. In Webb's view, settlement proceeded only after technological advancements such as the six-gun, windmill, and barbed wire allowed farmers and ranchers to master the environment. But Webb realized that aridity would continue to be a major regional problem, and because of this he questioned whether large populations could be sustained indefinitely in the Great Plains. Webb also noted the powerful impact of the Plains environment on those who came to settle there and the effect of the region on the rest of the country. Historically and methodologically, Walter Prescott Webb showed how to understand the Great Plains, and more than any other scholar he defined the Plains as a North American region.