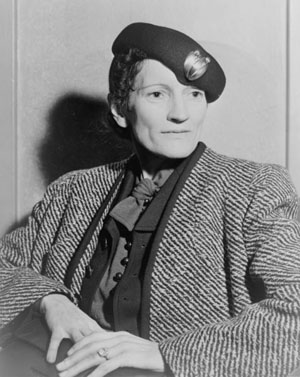 Mari Sandoz was born into the hardships of immigrant life in western Nebraska. In her short stories, novels, and histories of the Great Plains, Sandoz dramatized both the human conflicts and the beauty and danger of the arid environment. While Sandoz never directly confronted the replacement of Native Americans with families like her own, she was one of the first to chronicle vividly and sympathetically the cruel removal of Indians from their homelands.

Sandoz was born on May 11, 1896, in the Sandoz homestead on the Niobrara River, south of Hay Springs, Nebraska. The first of six children of Swiss immigrants, Jules and Mary Fehr Sandoz, her childhood and young adult years were difficult. A slight child, she was burdened from the age of six with childcare, kitchen, and garden chores. She faced discrimination as an immigrant in a ranching community and as the offspring of a quarrelsome father who fought with neighbors and abused his wife and children. Mari was nine before she was allowed to attend school and to learn to read and write English. These negative experiences and a brief story of hers published in an Omaha newspaper when she was almost twelve strengthened her determination to succeed as a writer.

Escaping from home into a marriage that eventually failed, Sandoz fled to Lincoln, Nebraska, to find work, enter the state university, and concentrate on writing. In 1935, after a long writing apprenticeship, Sandoz won the Atlantic Press nonfiction contest with Old Jules, a biography of her father and the communities he helped establish in the Niobrara country. This remarkable characterization of her father and his life, perhaps her best-known work, combines both an objective view of the opinionated, unkempt, brilliant, and well-educated man and an unobtrusive autobiographical view of his eldest daughter, the young Mari. Old Jules illuminates basic themes that appear in her later works: the struggle between ranchers and grangers; the need for strong governmental policies to protect freedom and prevent discrimination; respect for Native Americans; and the power and vulnerability of women on the frontier. Old Jules also introduces Sandoz's basic style, which is judgmental in its ironic view of human affairs and lyrical when it draws from her intimate experience with the beauty and danger of the Plains environment. Determined to protect the distinctive voice of the West, she fought her editors to protect her idiom and her bold language.

Sandoz's taste for history as story and story as history was whetted by evenings she spent crouched in the wood box behind the kitchen stove, listening to Jules swap stories with visitors: other settlers, old trappers and traders, and Indians. These stories reverberate in Sandoz's Great Plains series, the core of her work. The series includes three biographies–Old Jules, Crazy Horse: The Strange Man of the Oglalas (1942), and Cheyenne Autumn (1953) –and three histories–The Buffalo Hunters: The Story of the Hide Men (1954), The Cattlemen: From the Rio Grande across the Far Marias (1958), and The Beaver Men: Spearheads of Empire (1964). A seventh book, a partly researched history of oil exploration and exploitation, was unfinished when, on March 10, 1966, she died of cancer in New York City, her last "outpost."

Sandoz's histories have received more positive attention than her novels, which tend to be didactic. However, in her first novel, Slogum House (1937), the character of Gulla Slogum, who attempts to capture a frontier county by intimidation, theft, and murder, is strongly enough drawn to have elicited both outrage for its frankness and commendation for its characterization. All her novels are storehouses of the experiences and history of Plains settlement.

In 1950 Sandoz was awarded an honorary doctorate of literature by the University of Nebraska. The citation included recognition of Sandoz as an authority on Plains Indians. Her last history, The Battle of the Little Bighorn (1966), was told primarily from Native American perspectives. She insisted on going through the proofs before leaving for the hospital, where she spent her final days, an indication of Mari Sandoz's indomitable will and spirit.