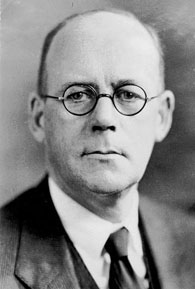 Born April 22, 1876, to Peder Jakobsen Rölvaag and Ellerine Pedersdatter Vaag, Ole Edvart Rölvaag grew up in the Norwegian hamlet of Rölvaag, a small fishing community on Dønna Island just below the Arctic Circle. Rölvaag immigrated to Elk Point, South Dakota, at the age of twenty and represented this immigrant experience throughout his fictional work. Nevertheless, impressions from his early years remained in his use of Norwegian ballads, hymns, folklore, and classic literature; his utilization of sea-going themes and images; and his blend of the romantic and realistic inspired by the stunning beauty of Dønna.

In his first published novel, the autobiographical The Third Life of Per Smevik (1912), Rölvaag detailed his hardships as a new immigrant in the West, explored the costs of immigration to America, and began to reveal his ideas on cultural integrity, that is, ensuring cultural identity is not sacrificed in the wake of the American Dream. He continued these themes in subsequent works–On Forgotten Paths (1914), Pure Gold (1920), and The Boat of Longing (1921)–before beginning his tour de force, Giants in the Earth, in 1923 while on sabbatical from St. Olaf College. First published in Norway in two parts, the novel revolves around Per Hansa and his wife, Beret. Deftly employing Norwegian folklore and myth, Rölvaag uses Giants to artistically exam ine the physical, cultural, and psychological realities of Plains immigrant life while offering characters who encapsulate more universal themes. Rolvaag wrote two more novels that charted the Hansa saga, Peder Victorious (1929) and Their Father's God (1931). Lacking the epic grandeur and stylistic brilliance of Giants, these two novels are more political in nature as they continue to promote Rölvaag's ideals of cultural integrity. Having already sketched out notes for a sequel to these novels, Rolvaag died of a heart attack on November 5, 1931, in Northfield, Minnesota.