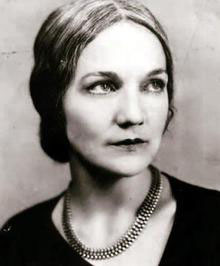 Katherine Anne Porter's varied fictional treatments of the Great Plains areas of Texas and the Southwest are important documents in the historical and cultural study of these regions. It must be kept in mind, however, that Porter–like most writers of fiction—freely adapted descriptions of this area for her own aesthetic purposes; hence, absolute realism cannot be expected in her fictional accounts of the Texas Hill Country, where she was born –at Indian Creek on May 15, 1890–and grew to maturity and which provided an important impetus for her creative work.

Among the finely crafted works of short fiction that describe and analyze the Great Plains areas of Texas and the Southwest are He (1927), The Jilting of Granny Weatherall (1929), The Grave (1935), Noon Wine (1937), Old Mortality (1938), and Holiday (1960). Inseparable from the hardscrabble rural landscapes are the memorable characters who are extensions and personifications of the land itself. The domineering grandmother in numerous stories has, in fact, been described as a "metaphor for Texas" because of her determination to survive and prosper despite the hardships and calamities inherent in the prevailing conditions.

Katherine Anne Porter, after a life of accomplishment (including a National Book Award and Pulitzer Prize, both in 1966) and enthusiastic living (she married and divorced three times), died on September 18, 1980, in Silver Spring, Maryland.