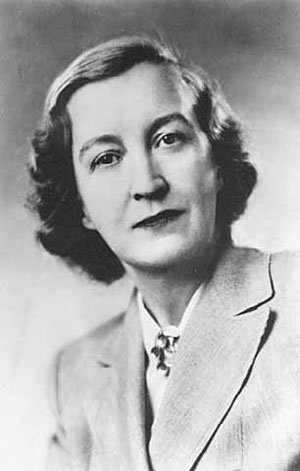 Martha Ostenso was a Minnesota novelist often claimed by Canadians because she lived in Canada for six years and set four of her novels there. She was born in Norway on September 17, 1900, to Sigurd and Olina Tungeland Ostenso, who migrated to the Midwest in 1902. After the family moved to Manitoba in 1915, Ostenso taught briefly in the interlake area north of Winnipeg. She attended the University of Manitoba for two years before following her creative writing teacher, Douglas Durkin, to New York in 1921. Himself a novelist, Durkin is said to have collaborated with Ostenso in all her novels, including Wild Geese, which won the Dodd Mead First Novel Award in 1925. Together they produced a dozen popular novels under her name over the next thirty years, including The Young May Moon (1929), The Mandrake Root (1938), and O River, Remember (1943). They reportedly earned up to $40,000 annually and kept a house in Beverly Hills where they socialized with stars such as Douglas Fairbanks Jr., Mary Pickford, and Henry Fonda, who starred in a 1941 Hollywood remake of Wild Geese.

Ostenso's best novel, Wild Geese, depicts a tyrannical Prairie patriarch overthrown by the suppressed vitality and moral courage of the women in his family. Hailed as an early contribution to Prairie realism, the novel draws much of its power from its romantic characterization. Ostenso's other novels, set mainly in the rural Midwest, portray family conflicts and the darker reaches of romantic love and often exhibit the author's gift for creating powerful female characters. Ostenso died in Seattle on November 24, 1963.