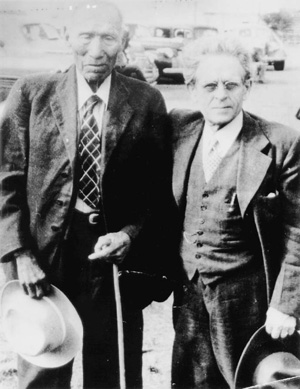 John G. Neihardt was born near Sharpsburg, Illinois, on January 8, 1881. After living for a time in a sod house in western Kansas and then in Kansas City, he moved to Wayne, Nebraska, where he graduated from Nebraska Normal College at age sixteen and wrote and published his first book, The Divine Enchantment (1900), which was based on Vedanta philosophy.

In 1900 Neihardt moved to Bancroft, Nebraska. He edited the local newspaper, worked as a clerk on the Omaha Reservation, and wrote lyric poetry, short stories, and novels. Outing Magazine commissioned Neihardt to record his experiences on a 2,000-mile trip down the Missouri River in 1908, later published as The River and I (1910). That same year, Neihardt married Mona Martinsen, a sculptor and former student of Rodin. They had four children: Enid, Sigurd, Hilda, and Alice.

Neihardt wrote literary columns for a number of newspapers, including the Minneapolis Journal (1911–21) and the St. Louis Post-Dispatch (1926–38), producing nearly 3,000 essays and reviews. In 1912 Neihardt began work on his five-volume epic Cycle of the West. The Cycle, completed in 1941, recounts tales of American explorers and fur traders of the trans-Missouri country (The Song of Hugh Glass, 1915; The Song of the Three Friends, 1919; and The Song of Jedediah Smith, 1941) and of the Native peoples dispossessed by those explorers and, later, settlers (The Song of the Indian Wars, 1925; The Song of the Messiah, 1935). While researching The Song of the Messiah, Neihardt met an Oglala Lakota holy man, Black Elk, whose vision he recorded in Black Elk Speaks (1932).

In 1921 Neihardt was named poet laureate of Nebraska. From 1949 until 1966 he was poet in residence and lecturer at the University of Missouri. He was working on a second volume of his autobiography when he died on November 3, 1973, in Lincoln, Nebraska.