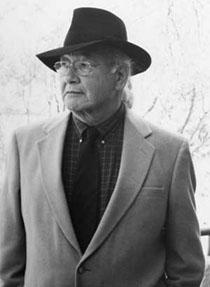 House Made of Dawn (1968), N. Scott Momaday's Pulitzer Prize–winning novel about a World War II veteran's experiences at Jemez Pueblo and in Los Angeles, was a ground-breaking literary event that attracted widespread attention to contemporary Native American writing as well as to much older written and oral Native American literature. Since the publication of that novel, Momaday has written another, The Ancient Child (1989), and has also gained international recognition as a poet (The Gourd Dancer, 1976; In the Presence of the Sun: A Gathering of Shields, 1961– 1991, 1992; In the Bear's House, 1999), an autobiographer and engaging interviewee (The Way to Rainy Mountain, 1969; The Names: A Memoir, 1976; Ancestral Voice, 1989; Conversations with N. Scott Momaday, 1997), an essayist (The Man Made of Words: Essays, Stories, and Passages, 1997), and a respected artist.

Navarre Scott Momaday was born in Lawton, Oklahoma, on February 27, 1934. Although he has lived most of his life away from his birthplace, southwestern Oklahoma and other Great Plains landscapes have dominated much of his best fiction and poetry. In The Ancient Child, some of his most lyric prose poems capture the majesty and seasonal beauties of Devil's Tower (Bear Lodge) in Wyoming and the Wichita Mountains' high meadows in spring. Several fine poems celebrate striking aspects of the Plains landscape (the "prairie fire" of sunrise in "Plainview 3") and Plains culture (The Gourd Dancer, "Rings of Bone," and the "Gathering of Shields" prose poems).

It is in The Way to Rainy Mountain, however, that Momaday offers his most sustained and moving testimony to the Great Plains. His father's people, the Kiowa, undertook a migration 300 years ago that traversed the Great Plains from the headwaters of the Yellowstone River to Rainy Mountain in southwestern Oklahoma and continued in later years with horseback travels through Texas to Mexico. For Momaday, the Plains area of southwestern Oklahoma is "a landscape that is incomparable," in part because it grounds and witnesses a grand paradox for his father's people, "a time that is gone forever, and the human spirit, which endures." To capture this landscape in twenty-four two-page sections, Momaday created three "angles of vision": storytelling (tribal narratives and family lore), history-fact, and personal experience. Together these viewpoints acknowledge the harshness of the Plains –blizzards, a summer heat as fierce as "an anvil's edge," tornadoes powered by a wild mythical horse–and document the tragedies of his people: 800 Kiowa horse carcasses rotting near Fort Sill, thousands of buffalo slaughtered, many Kiowas killed and taken into captivity. But in memory, in the present, and in the sense of sacred play of the three perspectives, the vitality of the Kiowa Plains endures in a mountain that "burns and shines" in the "early sun," in a reverence for the grand wanderings of great horsemen, and in the joy of seeing a newborn buffalo that adds life to the returning buffalo herds. Small wonder that Momaday can look at the remote knoll that is Rainy Mountain and see a place "where Creation was begun."

Scarberry-Garcia, Susan. Landmarks of Healing: A Study of "House Made of Dawn." Albuquerque: University of New Mexico Press, 1990.