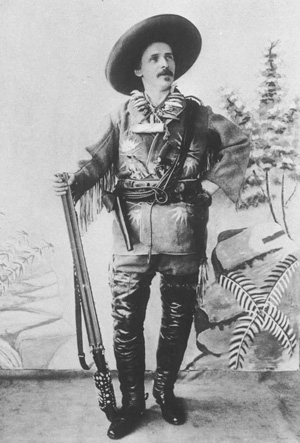 Karl May dressed as "Old Shatterhand"

Among the most popular German writers of all times, Karl Friedrich May was born February 25, 1842, in Ernstthal, Saxony, the fifth child of fourteen to impoverished weavers. After a difficult youth, May lost the opportunity to become a teacher when he was accused of the theft of a watch and had to serve a jail term. More serious charges of impersonation and fraud later sent him back to prison for a total of eight years.

When May was released at age thirty-two, he was determined to become a writer. By the time of his death on March 30, 1912, in Radebeul outside Dresden, May was wealthy and famous, and his place was firmly established in German history. His enormous success (he wrote some eighty books) rests on the gripping first-person narration of travel stories (translated into more than thirty languages), many set in the American West and six specifically on the Llano Estacado. In May's "Western" stories, the narrator, Old Shatterhand, a German frontiersman, forms a blood-brother bond with a noble, handsome, and intelligent Mescalero Apache chief, Winnetou, a character who may well be the most beloved figure in all of German literature. As described in The Spirit of the Llano Estacado (1887–88), these friends ride through dangerous, arid terrain and violently shifting weather patterns portrayed in vivid detail. In response to his fans' clamor, May had cards produced showing him dressed in trapper's clothing and signed "Dr. Karl May, known as ‘Old Shatterhand.'"

Revelations in the press concerning May's prison record and the fact that he had never been to the United States when he wrote his famous stories assaulted him mercilessly in the last years of his life. The question of May's sources–writers who had actually been in America, such as the Germans Charles Sealsfield, Friedrich Gerstäcker, Balduin Möllhausen, and the Irishman Mayne Reid, who spent time on the Llano Estacado–remains a major issue.