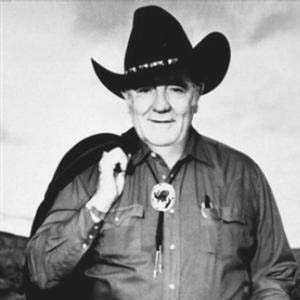 Louis L'Amour was an extraordinarily successful writer of Western fiction. He wrote more than 100 novels, of which there are more than 225 million copies in print. Dozens of his books were made into movies.

He was born Louis Dearborn LaMoore in Jamestown, North Dakota, on March 22, 1908. His father was a veterinarian who loved horses and athletics; his mother loved to read, write poetry, and tell stories. Louis grew up tough and with a voracious appetite for reading. When the family moved to the Southwest in 1923, Louis quit school. He spent the next two decades going through a string of knockabout jobs, from Texas cattle skinner to deckhand on ocean freighters and finally to World War II tank officer.

His adventures around the world gave L'Amour an appreciation for the sweep of human history that influenced all his writings. Starting in 1946 he concentrated on writing and published his first Western novel in 1950. Eventually, his output rose to three books a year. L'Amour was a dedicated researcher. His novels were known for their authenticity and accuracy, frequent tidbits of advice, and embedded historical lectures on the American West. However, he was foremost a master storyteller and had a superb gift for describing settings, locales, and the past. His actionpacked plots and heroic characters provided exciting entertainment for millions of deeply satisfied readers, who lovingly ignored the literary flaws of a writer who claimed never to have revised any of his work. L'Amour died on June 10, 1988, in Los Angeles, leaving outlines of more than fifty novels he had not gotten around to writing.