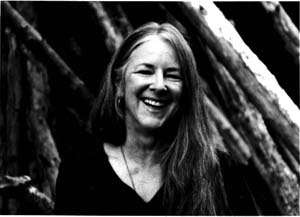 Contemporary Native American poet, novelist, and essayist Linda Hogan explores the relationship of humans to the natural world, both past and present. She was born in Denver, Colorado, on July 16, 1947, to a Chickasaw father and a mother of German descent. Her father's family in Oklahoma were gifted storytellers, and this heritage and love for the landscape inform her belief in the sacredness of the earth and its inhabitants. A teacher and political activist, Hogan has taught literature and creative writing at the Universities of Minnesota and Colorado. In 1986 she received an American Book Award for her book of poems, Seeing through the Sun.

An impassioned political and spiritual leader, Hogan catalogs the voices of the disenfranchised, particularly those who have suffered during the settling of the Great Plains. Her historical novel, Mean Spirit (1990), a finalist for a Pulitzer Prize in 1991, depicts the devastating impact of the 1920s Oklahoma oil boom on an Osage Indian community, especially its women.

Throughout her work, Hogan argues for a balancing of spiritual, intellectual, and physical realms based upon traditional Native beliefs that link past and present into one coherent vision. Contrasting the loud and often violent dominant culture with the voices of her ancestors, Hogan argues that chaos, violence, and greed have silenced the wisdom of the land, yet she seeks to lessen this alienation. The long "distances" she often evokes are the space of the Plains as well as the landscape of lost time and space.

In Hogan's work, women learn from experience that destruction of parts leads to destruction of the whole. She documents a history of extinction and the imposition of a philosophy without reverence or a sense of the future. Harshly rewriting the myths of Plains settlement, she nonetheless holds out hope for healing and rebirth, seeking new stories and habits that nurture the creative power of this region. There is hope, she says, in the land, the water, and those that listen.

Previous: Guthrie, A. B., Jr. | Contents | Next: Immigrant Literature