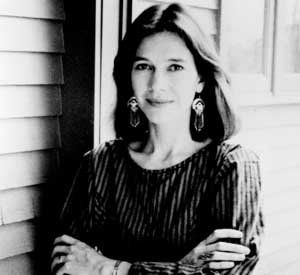 Since 1984, when she published the collection of poems Jacklight, Louise Erdrich has stood out as one of the more captivating and original voices not only in Native American literary circles but also in contemporary American literature generally. Erdrich's popular and critical success stems from her ability to craft evocative narratives that draw heavily on oral storytelling traditions and other aspects of Native American culture.

Born in Little Falls, Minnesota, in 1954, and raised in Wahpeton, North Dakota, Erdrich is a member of the Turtle Mountain Band of the Anishinabe (Chippewas), but she also has German-immigrant roots. She has drawn on these two traditions in her fiction while examining the challenges of coming to terms with mixed ancestry and celebrating the vitality of Chippewa history, culture, tradition, and community in the face of European American intrusion. Drawing on storytelling traditions of the Chippewas, Erdrich repeatedly constructs fictions that employ multiple narrators, including a dog in The Antelope Wife (1998), and span several generations, producing what one writer has called a "layered" point of view. But if her narrative style appears nonlinear and disjointed to the reader, what readily emerges is Erdrich's strong sense of place. These stylistic and thematic features have prompted critics and reviewers to compare Erdrich's North Dakota landscape to Nobel Prize–winning author William Faulkner's Yoknapatawpha County, especially as they emerge in her well-known tetralogy (Love Medicine, 1984; The Beet Queen, 1986; Tracks, 1988; The Bingo Palace, 1995; and The Antelope Wife, 1998), which focuses on three Chippewa families and others on and around the reservation. Erdrich does not shy away from difficult issues such as alcoholism and broken families that confront Native communities; however, by infusing her tales with humor, folklore, and spirituality, Erdrich treats her subjects with both compassion and sensitivity.