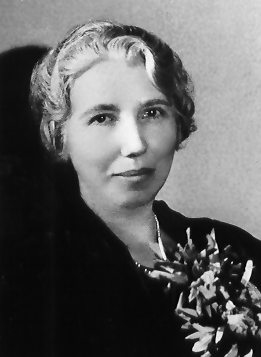 Bessie Genevra Streeter Aldrich (Margaret Dean Stevens, her pseudonym until 1918) was born on February 17, 1881, in Cedar Falls, Iowa. She lived there until 1901, when she graduated from Iowa State Normal School with a degree in education. In 1907 she married Captain Charles S. Aldrich; in 1909 they moved with their baby daughter to Elmwood, Nebraska, where they had become co-owners of the American Exchange Bank and where their three sons were born. Aldrich was widowed in 1925 yet put all of her children through college with her writing. She remained in Elmwood until 1945, when she moved to Lincoln, Nebraska, where she lived until her death on August 3, 1954.

Aldrich wrote nine novels, all of which, after her A Lantern in Her Hand (1928), were on the best-seller list. In addition, Aldrich wrote more than 100 short stories, which were first published in magazines; many were later republished in two volumes. One story won an O. Henry Award. Aldrich also was the author of one novella and two omnibus editions and served as a scriptwriter for Paramount. Much of her work has been anthologized and produced for radio and television. Her novel Miss Bishop (1933) became the movie Cheers for Miss Bishop (1941). All of Aldrich's novels remain in print, in standard editions as well as Braille and large print, and in a number of European and Asian languages. Her short stories from 1920 to 1954 also remain in print.

Bess Streeter Aldrich used the rural Midwest and Great Plains for both her long and short works. She is best described as a romantic realist who wrote of rural life in a positive sense, valuing its warmth and generosity of spirit, yet who was honest enough to show that it was not perfect.

Aldrich received an honorary doctorate from the University of Nebraska in 1934 and the Iowa Johnson Brigham Literature Award in 1949, and she was posthumously elected to the Nebraska Hall of Fame in 1973.